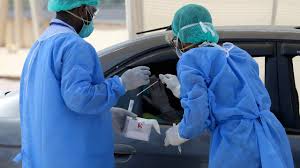 (WASHINGTON) – The United States is on the cusp of a terrible milestone: a staggering and once-unthinkable half a million are dead from the coronavirus.

500,000 people lost to COVID-19: That’s roughly the population of Kansas City, Missouri, and nearly the size of Atlanta, Georgia, John Raby of the Associated Press reports.

The figure surpasses the number of people who died in 2019 of chronic lower respiratory diseases, stroke, Alzheimer’s, flu and pneumonia combined.

“It’s nothing like we have ever been through in the last 102 years, since the 1918 influenza pandemic,” the nation’s top infectious disease expert, Dr. Anthony Fauci said on CNN’s “State of the Union.”

That bleak toll is expected later today and you can find coverage here.

President Joe Biden will mark the somber occasion with a moment of silence and a candle lighting ceremony at the White House.

One month into the Biden presidency, the government is on a glide path to reach its initial goal of administering 100 million vaccine doses in his first 100 days in office. Now comes the far more ambitious and daunting mission of vaccinating all eligible adults against the coronavirus by the end of the summer. The limited supply of the two approved vaccines has hampered the pace of vaccinations, and that was before extreme winter weather delayed the delivery of about 6 million doses this past week.

But the U.S. is on the verge of a supply breakthrough as manufacturing ramps up and with the expectation of a third vaccine becoming available in the coming weeks, Zeke Miller of the Associated Press reports.

Health officials in the nation’s capital are hoping religious leaders will serve as community influencers to overcome what they say is a persistent vaccine reluctance in the black community. Several black ministers recently received their first vaccine shots. Black residents make up a little under half of Washington’s population but constitute nearly three-fourths of virus deaths.

The city is now offering vaccinations to any resident over age 65, but numbers show that seniors in the poorest and blackest parts of the District of Columbia are lagging behind. The government responded by giving priority status for vaccine registration to predominantly black ZIP codes, Ashraf Khalil and Hilary Powell of the Associated Press report.