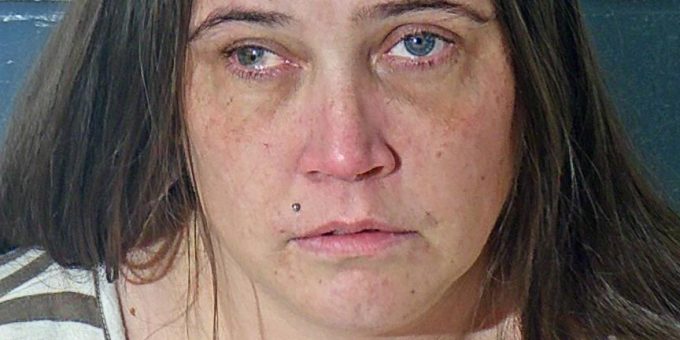 (BEDFORD) – On Friday night, a Bedford woman was arrested on a charge of possession of meth and an outstanding warrant after a Bedford Police officer stopped her vehicle at 18th and P streets for a traffic violation.

Police say the driver, 42-year-old Kathy Stewart, was traveling east on 18th Street when the officer witnessed her swerve her Oldsmobile abruptly to the left almost striking a parked car, and then immediately attempt to park on the northside of 18th Street, just east of P Street.

The officer stopped Stewart and when he approached her vehicle he witnessed her reaching around in the vehicle.

Stewart told the officer she has a hard time seeing at night while driving and was not aware she almost struck a parked vehicle.

The officer then asked Stewart consent to search the vehicle which she denied.

Officers then learned Stewart was wanted on a warrant and she was arrested.

Once arrested, Stewart told police she had a bag containing crystal meth inside of her bra.

Stewart was arrested on a charge of possession of meth.

The warrant stems from an incident January 31, 2021. At 7:43 p.m. Bedford Police officers were called to the intersection of 19th and O streets on a report of an accident with injuries.

When police arrived they found Stewart in the driver’s seat of a 1980 Oldsmobile. She was intoxicated. She had suffered minor injuries to her face and nose. She was transported by ambulance to IU Health Hospital for treatment.

The medics told police that Stewart appeared to have overdosed on some form of medication. The medics administered Narcan to Stewart while transporting her to the hospital.

While at the hospital, the nursing staff found a baggie of marijuana and several pills of Alprazolam in Stewart’s possession.

A warrant was requested for Stewart’s arrest on charges of operating a vehicle while intoxicated, OWI with a prior conviction, possession of a controlled substance, and possession of marijuana.