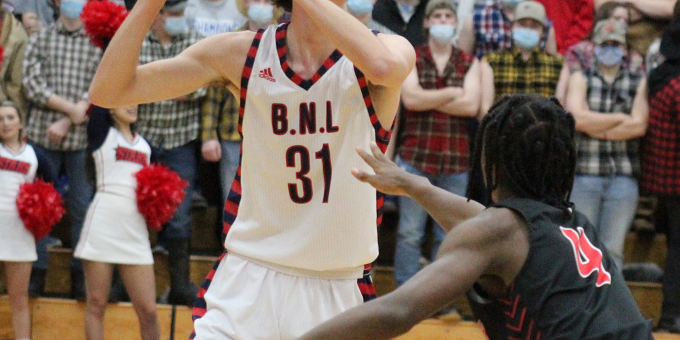 BEDFORD – One of the few good things to evolve from all the virus chaos, adjustments and confusion during this tumultuous basketball season is the coupling of new, untraditional partners to complete a fractured schedule.

Hence, with the days few before the start of the postseason, Bedford North Lawrence will make its first journey to North Knox for a Tuesday night clash with the Warriors. Regardless of size or competition level, a game is a game, especially for teams that need a boost.

The Stars (9-10) have a final week to prepare for the battleground of Sectional 15 at Seymour, and they will finish with a tournament-style conclusion, three games in four days, beginning with a debut test against North Knox (10-10).

For BNL, this final road trip is important. The Stars have bobbed up and down around the .500 mark most of the year, flirting with momentum and battling competitively with everyone on their schedule. If they’re ready to reach maximum potential, powering into the sectional with a winning streak would be key.

“Peak at the right time, that’s what we’re trying to do,” BNL coach Jeff Hein said. “I see a lot of good things. Only time will tell, but I think these kids want to continue to play basketball, And that’s a big part of it.

“Some kids, when it gets to the end of the year, are ready for it to be over. How bad to you want to continue to play? I really believe these kids want to continue playing. Are we good enough to do that? We’ll see. But we have the other part whipped at this point.”

North Knox is coming off a four-game road swing and a 46-35 victory over Wood Memorial on Saturday. The Warriors, hosting a Class 4A opponent for the first time since the 1970s, will feature junior guard Holtman Doades (15.2 points per game) and senior Reece Hammelman (8.5). Doades had 18 and Isaiah Collins added 11 in the win over the Trojans. That triumph clinched back-to-back seasons of double-digit wins for the first time since 2015.

“We’ve gotten tremendous buy-in from our players,” North Knox coach Daniel Crabtree said. “They were eager for change and hungry to win. We implemented a defense-first approach, and the players soon realized if we defended in the halfcourt we gave ourselves a chance to win.

“We feel our biggest strength is our packline defense. We also have several capable shooters and ballhanders.”

The Stars will counter with sophomore guard Colten Leach (12.9), senior Kooper Staley (10.5) and senior Ben Cosner (10.5 after a career-high 22 against New Albany on Saturday).

Last meeting: This is the first meeting between the schools.

Game notes: North Knox is seeking its first winning season since 2014-15. The Warriors went 10-61 in the three seasons prior to coach Daniel Crabtree’s arrival last year.