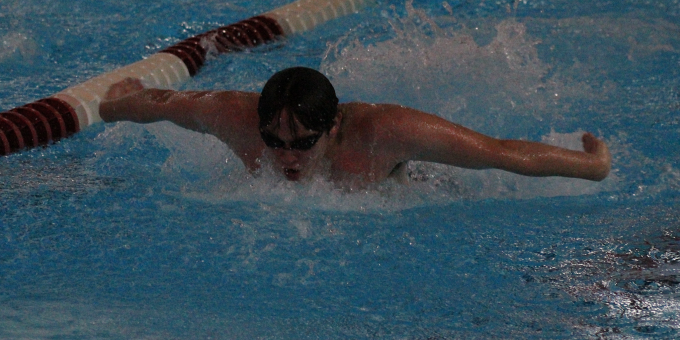 JASPER – Bedford North Lawrence junior Alexander Swenson advanced to the IHSAA state finals with a victory in the 200-yard individual medley during the boys swimming sectional at Jasper on Saturday.

Swenson, the top seed following Friday’s preliminary races, touched first in 1:59.82. The winners in each event automatically advanced to the state championships on Feb. 26-27 at IUPUI.

BNL finished second in the team competition with 360 points. Jasper won the sectional title with 540.

The Stars had four runner-up finishes. The 200 medley relay (with Cole Baker, Garrett Henson, Swenson and John Allen) clocked 1:42.19 while Jasper won that event. BNL was also second in the 400 free relay (with Baker, Adam Tlustek, Swenson and Allen) in 3:23.87, with the Wildcats also taking that race.

“The guys overachieved in every phase of the meet,” BNL coach Adam Young said, “Nothing but amazing time drops. Every single guy on the team left it all in the pool and there wasn’t a fraction of a second more that could be squeezed out of them  They gave maximum effort and got excellent results.

“While on the surface it is disappointing to only send one swimmer to state and come up short in the team standings, this team conquered more adversity than any team should be asked to take on.  I told everyone the goal this season was to survive and finish.  Not only did this team survive, they thrived.

“We are now the favorite to win next year.  That means absolutely nothing if we don’t take care of business in the off season.  The guys have to put the work in but it is there for the taking.  This season won’t show up a lot in the record books or the trophy case, but I have to tell you it is a season that will be talked about for years to come.”

Swenson will compete in the state prelims (in the second of two sessions) on Friday at 5:30 p.m. The top eight seeds from the prelims will advance to the state championship race, while places 9-16 will qualify for the state consolation.