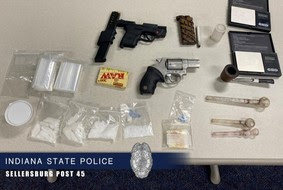 (CHARLESTOWN) – A traffic stop on Thursday afternoon ended with the arrest of both the driver and passenger on drug and weapons charges.

Around 3:45 p.m. Thursday, an Indiana State Police trooper stopped a driver for failure to signal his turn and for having an obscured license plate.

After stopping the car, the trooper learned the driver, 39-year-old Dustin Todd Shackleford, 39, of Henryville, was wanted out of Clark County on a charge of invasion of privacy.

The trooper also found a firearm in Shacklefords’ backpack.

As a result of the investigation, the trooper conducted a search of the vehicle and found more than 60 grams of meth in the purse of the passenger inside the vehicle, 31-year-old Lara Lee Gater, of New Albany.

Both Gater and Shackleford had firearms in their possession.

Indiana State Police were assisted by the Charlestown Police Department.