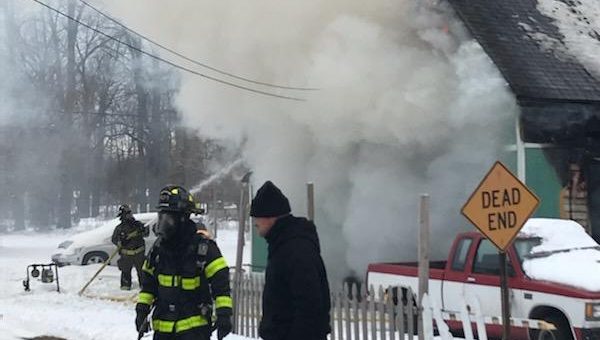 (MITCHELL) – A Mitchell couple escaped a house fire Wednesday afternoon after one of the homeowners was trying to thaw out frozen water lines.

Firefighters responded to the fire in the 1300 block of Crandall Street at 4:53 p.m. Becky Teague told the dispatchers she was in a wheelchair and was having a difficult time getting out of the home. Becky has muscular dystrophy and other health issues.

Mitchell and Marion Township Volunteer firefighters along with police officers from Mitchell and Lawrence County Sheriff’s Department quickly responded to the home owned by Frank and Becky Teague.

A short time later she was able to tell the dispatchers she was out of the house.

“I am all right, other than having a little chest pain,” said Becky Teague.

” I was kind of dumb, I did a stupid thing, my water froze up and has been for the last several day. I was using a Torpedo heater to thaw out the pipes and caught the home on fire,” said Frank Teague as he watched firefighters work to extinguish the blaze.

Frank and Becky were able to escape the smoke filled home with their dog.

“When we arrived at the fire, we found heavy fire coming from the living room of the residence. We were able to get her wheelchair, and her leg braces from the home,” said Wayne Coble Assistant Fire Chief of the Mitchell Volunteer Fire Department.

” I just got the home paid off, and now this happens. But, just thankful we were able to get out with no injuries,” Frank Teague stated.

The family is being assisted by American Red Cross who is assisting the family in replacing their oxygen system.

“We have nothing but high praise and respect for the family,” said Robert and Jamie Floyd who are their neighbors. They were on the scene to make sure Frank and Becky were okay and to give them hugs and support.

The couple did not have home insurance. A GoFundeMe page has been created to help the Teagues with expenses.

In addition, Robert and Jamie Floyd have placed donation boxes at the Mitchell Ruler store. If you would like to help the family you can contact Robert Floyd at 812-690-0475.

“We want to remind residents to be careful during this time of year in using alternate heating sources such as space heaters. Also, make sure you follow the companies recommendations when using their products. Always make sure you have a working smoke detector in your home,” said Assistant Chief Coble.

Firefighters were on the scene until 8:15 p.m. with bitter cold temps of 22 degrees. Twenty-one 21 firefighters from the three departments battled the blaze. The Orleans Fire Department also rendered aid at the fire by providing their cascade system. This allows firefighters to refill air bottles at the fire scene.

There were no injuries reported at the scene.