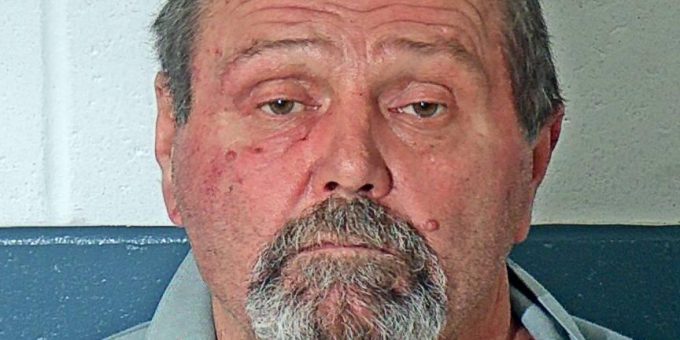 (BEDFORD) – A Martinsville man was arrested after Bedford Police officers were called to Shorty’s Den in the 1300 block of 7th Street, at 7:29 p.m. Wednesday about a man causing a disturbance.

When police arrived they found 60-year-old Michael Richards sitting in the driver’s seat of a blue Ford pickup. While backing from the parking lot Richards struck two parked vehicles in the parking lot.

Richards was unable to get out of the driver’s door due to damage caused by the accident.  Therefore, Richards was asked to exit the vehicle through way of the passenger side door.

Richards told police he was just attempting to park his vehicle and denied hitting any vehicles.

At that time, officers handcuffed the resisting and combative Richards.

Officers secured a search warrant for a blood draw at IU Health Hospital.

During the blood draw, Richards continued to be disorderly, leading him to be restrained to the hospital bed for the blood draw. Richards claimed he was a member of the Arian Brotherhood and was a “Mighty Whitey”. He then threatened he would hurt the officers.

Once medically cleared, Richards was transported to jail.

Richards faces charges of operating a vehicle while intoxicated with a prior conviction within five years, OWI endangerment, disorderly conduct, and resisting arrest by force. He was also issued a citation for violation of a conditional operator’s license.