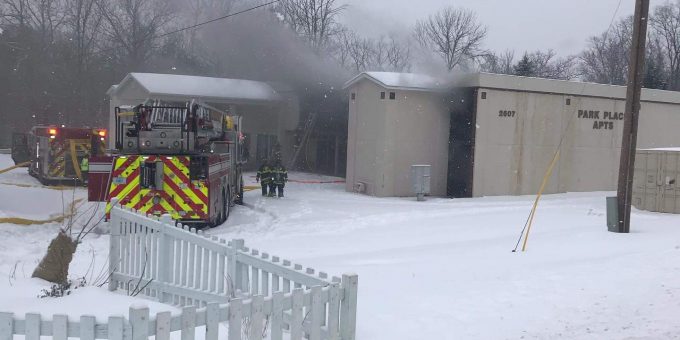 (BLOOMINGTON) – A City of Bloomington firefighter was transported to the hospital following a structure fire early Thursday morning.

The Bloomington Fire Department was dispatched to 2600 North Walnut Street at 8:36 a.m. to an abandoned building. The building was formerly known as Park Place Apartments.

“We did have one firefighter that was transported to IU Health Bloomington Hospital due to smoke inhalation. That firefighter has already been released from the hospital and is expected to return to duty their next shift,” said Bloomington Fire Chief Jason Moore.

Firefighters arrived within four minutes of the call and found smoke coming from the building. North Walnut Street was closed from the Indiana State Road 45/46 bypass to Old State Road 37 while fire crews worked to get the fire under control.

The cause of the fire was an illegal burning operation used to reclaim copper wiring and electronic devices.

No civilian injuries occured in the blaze.