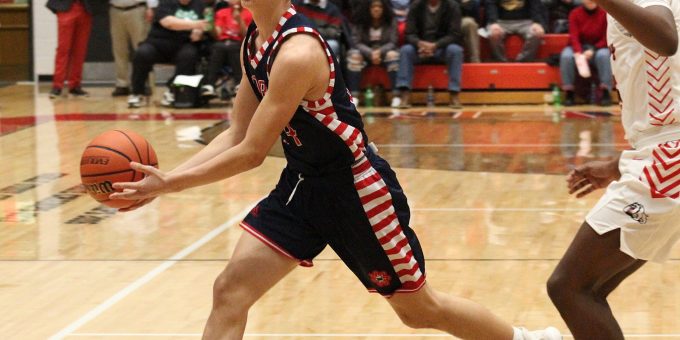 BEDFORD – The traffic jam at the top of the Hoosier Hills Conference standings resembles rush hour in any major metropolitan area: everyone trying to get to the same place in a hurry, with no separation.

Four rivals are piled atop one another with 4-2 records, with one contest remaining, and a four-way split of the championship in the eight-team league would be unprecedented. Three shared the title in 1998.

Bedford North Lawrence will be cast in a spoiler role, in position for payback, when New Albany, one of the quartet of contenders, visits BNL Fieldhouse on Friday night.

Theoretically, BNL (9-9 overall, 3-3 in the HHC) could still claim a piece of the prize with a win over the Bulldogs (13-6) and a perfect storm of “what if” upsets in the other four remaining games among the frontrunners. That’s mind-boggling and totally out of BNL’s control. That’s why the games are played on the court. All the Stars can control is their shot at revenge against New Albany.

Last season, BNL made the journey to New Albany with a chance to win a share of the league and claim its first title since 2011. The Bulldogs ruined that with a tough 44-41 triumph as BNL finished 5-2 in the conference while Jeffersonville won the crown at 6-1. Now the situation is reversed.

“I think it is crazy,” New Albany coach Jim Shannon said of the wild league standings and scenarios. “I‘ve never seen anything like this. But you know what? We still have a chance and that makes it fun. If we have to share it with someone else, that’s OK. We’ll be glad to share it if we can.”

The possibilities in the race fail to factor an intangible: which New Albany will show up on Damon Bailey Court? That’s almost been as unpredictable as the standings. If it’s the New Albany that gunned down Class 3A power Silver Creek (81-72 on Jan. 22), the Stars will have their hands full. If it’s the New Albany that scored only 29 points the very next night (against Evansville Reitz) after that huge win, the Bulldogs will be in jeopardy.

The Bulldogs have a long list of impressive wins: Floyd Central, Bloomington South, Jeffersonville. And a couple of head scratchers: overtime with Seymour, the meltdown at Reitz, scoring only 28 points against Zionsville during a 30-point loss. Jekyll or Hyde?

“I wish I knew,” Shannon said. “Sometimes it’s a very simplistic thing. If the ball is going in the basket, you play a lot better. If it doesn’t, you struggle a little bit. That’s what we’ve done all year. When we shoot well from 3, we’ve played really well. When we struggle from the 3-point line, we have to grind it out.

“We have played really well against teams on our schedule with better records. I can’t put a finger on it. We seem to rise to the occasion when there’s something on the line. Hopefully we’ll do that with the conference still being up for grabs.”

New Albany will feature junior guards Tucker Biven (who is a University of Louisville baseball recruit) and Kaden Stanton. Biven leads the Bulldogs in scoring at 17.0 while Stanton totals 13.0, although it was Stanton who scored 21 in last year’s victory over BNL.

“Stanton drives it so hard to the basket, and he has the ability to shoot it from about 28 feet,” BNL coach Jeff Hein said. “He’s tough to defend. And Biven is the same way. A lot depends if they’re hitting that night. That’s why they’ve been up and down. Man, when they’re on, they’re pretty hard to beat. And they’re so hard to score against. They’re so good defensively, they press the ball hard and get in passing lanes.”

“There’s no question they’re very dangerous,” Shannon said. “Trying to contain Leach is vital. He’s very good one-on-one. If you dare help, he’ll hit the open guy. And of course you can’t leave Staley. He can flat put it in the basket. You can’t let him sit out there and shoot it.”

In addition to the conference implications, New Albany is also a possible sectional opponent, and the IHSAA will announce that draw on Sunday. With the state tournament rapidly appearing on the horizon, the Stars need to build momentum for the postseason during its final three home games.

“I don’t think we’ve peaked yet by many means,” Hein said. “We still have some good basketball in us, if we can just find it. We’ll find out a lot about ourselves this weekend.”

New Albany has won 11 straight games in the series, dating back to BNL’s triumph in the 2012 sectional.