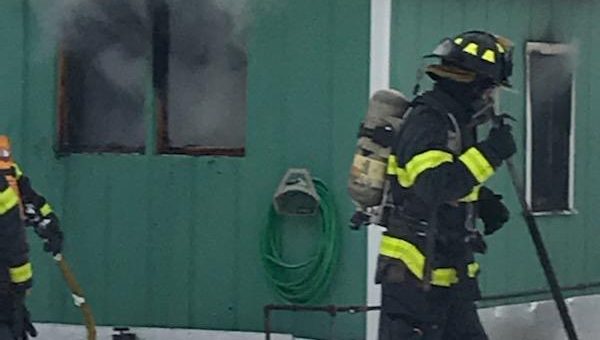 (MITCHELL) – Firefighters are battling a fire in the 1300 block of Crandall Street in Mitchell.

Firefighters from Mitchell and Marion Township Volunteer Fire Department responded to the fire at 4:53 p.m.

Orleans Volunteer Fire Department were requested to assist at the scene.

Duke Energy and Centcom (Vectren) responded to shut off the utilities.

The house is owned by Frank and Becky Teague.

Both and the couple’s dog were able to get out of the house. Becky, who is in a wheelchair and has muscular dystrophy was treated at the scene by a Seals ambulance crew after complaining of chest pain.

Officers with the Mitchell Police Department and Lawrence County Sheriff’s Department are also on the scene offering assistance.

The water pipes in the home froze had been frozen for several days. The homeowners were thawing out those pipes with a propane heater when the fire started.

The couple have no insurance on the home.

The Red Cross was called to the scene to assist the family.