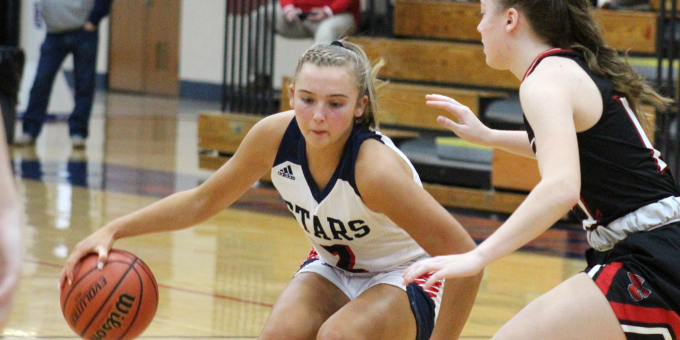 BEDFORD – During the past 10 seasons, only one team in Indiana has won more games than Bedford North Lawrence. The Stars are the only team in the state to win a sectional championship each year during that same span.

The level of excellence, and the pressure of expectations, is extraordinary.

So when the Stars lose six seniors from a remarkable 22-3 campaign, don’t count on slippage. BNL will, as the cliche proves true, simply reload, not rebuild.

BNL will certainly miss the departing senior class, which accounted for 36.5 points per contest, for their considerable on-court contributions and off-court leadership skills. They were especially effective during this past virus-tainted season, when the unexpected became usual circumstances.

Yet, the future is in the air, blowing with the winds of change. The Stars have plenty of returning firepower and promising additions to make 2021-22 another trophy-contending campaign.

“I feel good about the future,” BNL coach Jeff Allen said. “A lot of coaches lose three starters, and you feel nervous. I don’t feel nervous, I’m excited about it. These other kids will get a chance to show what I know they can do. We’re going to reload, we’re going to rebuild. We’ll continue to go forward.”

Allen’s contagious optimism starts with the two returning starters. Chloe Spreen, the team scoring and rebounding leader as a freshman, and Karsyn Norman are extremely talented, and they will be the centerpieces.

Spreen, who came into the program with hype and publicity as the next superstar, quietly lived up to the fanfare as one of the top freshmen in the nation. She averaged 14.8 points and 5.5 rebounds while shooting 50 percent from the field. She handled everything with grace and determination.

“It’s always a struggle the freshman year, to figure things out. It’s a huge difference between AAU and high school basketball. There were some moments it was a tough transition for her, but she did a great job. She handled it gracefully. She was playing at a high level at the end of the year. Having a player like that on your team, she makes the other kids better. That’s why I’m looking forward to the future.”

Norman, a dynamic sophomore guard, totaled 9.5 points and 3.2 assists. Her future value was displayed during BNL’s five-game run in the state tournament, when she boosted the scoring to 14.8 and the shooting percentage over 50 percent. She was arguably the team MVP in the sectional.

“In the sectional she played at the level I know she’s capable of playing,” Allen said. “Next year, from a scoring standpoint, she knows that role will change for her. We had great scorers and shooters this year, and she had to get the ball to people with the hot hand. Next year that will be part of her role, to score the basketball. I expect her to embrace that.”

The rest of the cast will likely include Carlee Kern, who was a key part of BNL’s eight-player rotation as a defender and rebounder. The leading contenders for backcourt spots are currently freshman Madisyn Bailey and sophomore Emma Brown, the top scorers from BNL’s 14-2 junior varsity.

“I fully believe Madisyn and Emma would be starting on most varsity teams this year,” Allen said. “That‘s the great thing about having a great program, and also the bad thing. You have young kids who are skilled and qualified to play minutes, but they’re playing behind people who are really good.

“Emma and Madisyn will step in and it will be a good transition for both those kids. They’ll play well. They’re both capable of shooting well, they understand the game. And we’ll try to play a similar style we did this year because we’ll be small.”

Allen will also look for roles from Mallory Pride, Ella Turner and Emma Crane as they make the jump to varsity competition.

“We have to develop some kids off the bench,” Allen said. “Those kids can contribute, give us some size and rebounding. We may have some bumps in the road early, but I like the group of kids coming back.”

BNL adjusted its style this season, playing more aggressively with constant defensive pressure and 3-point freedom. The Stars launched 45 percent of their shots from long range and averaged 61.8 points per game. That attack, and the goals of the Hoosier Hills Conference and the sectional championships, will remain the same.

“Playing free and easy is great, especially when you have shooters like we do,” Allen said. “But there are times to execute, and I don’t know we did that when we really needed. That’s something to evaluate and make better.

“We’ll be able to compete with the conference teams, and in the sectional. As far as the state goes, we’ll see what happens. I’m excited about it.”