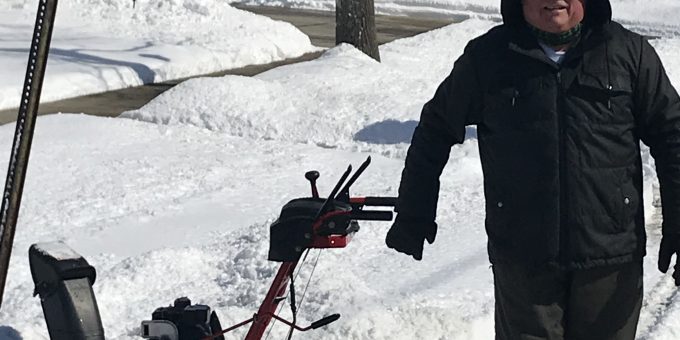 (BEDFORD) – Bedford Police Officer Mark “Cotton” Duncan retired from the department in 2006. However, retirement has not slowed down his service within the community.

Duncan continues to serve those around him.

“I try to look out for those in my neighborhood, some are elderly and cannot get out like most of us can,” said Duncan.

Duncan estimated snow accumulation in his neighborhood to measure up to 10 inches in snow drifted areas.

For the last six years, Duncan has been emplyed by Crowders Pharmacy, and conitinues to work on many projects for his church. Many from the neighborhood appreciate Mark’s efforts and service he has provided them, not only this week, but also throughout the many years of him doing so.

Digging Out From The Storm:

Lawrence County residents and business owners started digging out from the storm early this morning, clearing sidewalks and driveways and clearing off vehicles.

More winter weather is still in the forecast for Wednesday and Thursday which will add an additional 2 to 4 inches of snow, according to forecasters.

Bedford Street Department removed huge snow mounds around the courthouse square today. Crews worked several hours clearing the city streets and are making preparations for yet another predicted snowstorm that could arrive on Wednesday.

1340 AM WBIW, Super Oldies 105.5 WQRK, and Lite FM 102.5 WPHZ will keep you updated on weather, traffic, and emergency information as we receive it.