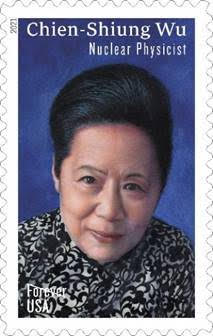 This new commemorative Forever stamp honors professor Chien-Shiung Wu (1912-1997), one of the most influential nuclear physicists of the 20th century. The stamp was dedicated during a virtual ceremony and is now being sold at Post Office locations nationwide and online atusps.com/wustamp.

“It is a privilege to represent the U.S. Postal Service as we honor the life and achievements of Dr. Chien‑Shiung Wu,” said dedicating official Kristin Seaver, chief retail and delivery officer and executive vice president, U.S. Postal Service. “And, we believe that today, (Thursday) the International Day of Women and Girls in Science is perfect timing for this dedication.”

Seaver was joined for the ceremony by Vincent Yuan, a scientist at the Los Alamos National Laboratory and son of the honoree; Jada Yuan, granddaughter of the honoree; and Brian Greene, professor of physics and mathematics at Columbia University. The ceremony can be viewed on the Postal Service Facebook and Twitter pages.

“I am elated to have my mother honored by USPS on a postage stamp because I believe it goes beyond recognizing her scientific achievements; it also honors the determination and moral qualities that she embodied,” said Vincent Yuan. “It’s even more profound that the recognition comes from America, the country of her naturalization that she loved.”

The stamp art features a detailed portrait of Wu wearing a black-and-white high-collared traditional Chinese gown known as qipao. The illustration was first drawn in graphite, then rendered in egg tempera paint. The background was painted with the pigment lapis lazuli, a highly valued color historically used in artistic depictions of angels, nobility and religious figures.

The spelling of Wu’s name on the stamp reflects how she wrote her own name and referred to herself. It is also how she was known to the scientific community at large. This Romanized spelling of her name is based on the Wade-Giles system, which is all but obsolete for Chinese words and names. The Pinyin system of phonetic notation for Chinese characters is now the standard in both China and the United States.

The Chien-Shiung Wu stamp is being issued as a Forever stamp in panes of 20. These Forever stamps will always be equal in value to the current First-Class Mail 1-ounce price.

News about the stamp is being shared on social media using the hashtags #ChienShiungWu and #ScientificWomen.

A pictorial postmark of the designated first-day-of-issue city, New York City, is available at usps.com/shopstamps.

During a career that spanned more than 40 years in a field dominated by men, Wu established herself as an authority on conducting precise and accurate research to test fundamental theories of physics.

Wu moved to the United States from China in 1936 and earned her Ph.D. in nuclear physics in 1940 from the University of California, Berkeley. During her time there, she worked alongside other pioneering nuclear scientists and attained star status on campus and in the physics community at-large.

In 1944, Wu accepted a position under the Division of War Research at Columbia University, where she worked on uranium enrichment and radiation detectors for the Manhattan Project. Conducting highly classified research to produce the world’s first atomic bomb, Wu made invaluable contributions to the experimental process of splitting and harnessing the power of the uranium atom.

After the war ended, Wu stayed on at Columbia as a research professor, focusing her experimentation on beta decay. With ingenuity and careful research, she created a more precise spectrometer to finally explain the problem of beta decay, one that had plagued physicists in America and across Europe for decades.

In 1956, theoretical physicists Tsung-Dao Lee and Chen-Ning Yang approached Wu for help in developing a theory that disproved the foundational principle of conservation of parity. Wu created a thoughtful and intricate experiment to test the theory. She observed that in weak interactions, parity is not conserved — a finding that overturned a decades-old, intrinsic element of quantum mechanics and earned the lead physicists the Nobel Prize in Physics.

Wu spent the rest of her career as a respected experimental physicist and determined advocate for women in science. She made enormous contributions to the physical sciences, altering modern physical theory forever.