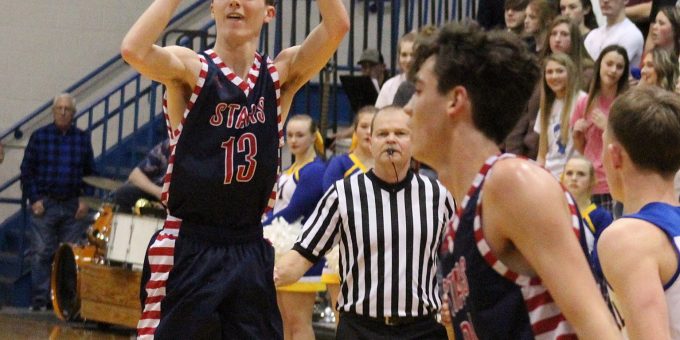 BEDFORD – Can you really go home again? Jackson Ryan is about to find out.

On Friday night, he will be on the enemy sideline for the first time as a first-year head coach, leading Mitchell into the annual renewal of the county rivalry. The view is far different on the opposite side of BNL Fieldhouse.

The Bluejackets (3-9 with five straight losses) will challenge BNL’s total dominance in the series. The Stars are 45-1 with 34 consecutive wins since the lone loss in 1986. Ryan helped compile those numbers. Now he would love to shatter that streak.

“Growing up as a kid, and playing there, it’s just going to be neat to be back,” Ryan said. “I’ve been on the other side of this game. Being on the sideline this time around, and being a Bluejacket, I’m excited for the opportunity. Things are different. I’m looking forward to another chance for our kids to play.“

Ryan has faced unprecedented adversity in his debut campaign. The Bluejackets had only one returning starter from a year ago. Virus protocols have forced two shutdowns, and there’s nobody for a 26-year-old to seek advice on how to deal with all this. Nobody has been through anything like this.

“I couldn’t have picked a worse time,” Ryan said with a laugh. “But I have to give my kids credit. We have faced some serious adversity, on the court and off the court, and they still go to work every day. They give us everything they have.

“The biggest thing is taking it one day at a time. You don’t know from one day to the next. Don’t worry about tomorrow or next week. Just tackle what is in front of us. Balance everything out. It’s been an experience.”

This game almost didn’t happen. The original date was Jan. 15, with Lawrence County under a red code for the virus, but school officials couldn’t agree on allowing parents to watch the clash at BNL. The game was cancelled. When BNL’s game this week with Brownstown was cancelled because of Brownstown’s recent quarantine, the county collision was back on.

And this time, fans will be present. The Stars, tired of generating their own spark in empty gymnasiums, couldn’t be happier about that.

“Every game has seemed like a freshman game,” BNL coach Jeff Hein said. “We can actually get a game with some energy in the gym. We’ve had to create our own energy all year long. We’ve talked about energy, effort and enthusiasm all year. Creating that energy is hard to do.

“Our kids behind the bench, not playing, have been instrumental in that. With no fans, nobody in the gym, we’ve had to find ways. It’s been a unique season. These kids know each other, so it’s important for them to play this game. At the same time, these kids have had the opportunity to play. It’s been a great blessing to have a season.”

On the court, Mitchell has been blessed to have junior Nick Mundy, who’s averaging 12.4 points. The Jackets have solid guards in senior Alec Barlow (7.6) and Nate Reynolds, while youngsters Kade Wigley (8.9) and Ben Seitzinger have made an unexpected impact.

“Nick does it all, leads us in almost every statistical category,” Ryan said. “Before the season started, if you told me Kade Wigley and Ben Seitzinger were going to be playing serious varsity minutes, I would have thought you were crazy. They stepped up. We’re still figuring things out, people are still growing and learning. It’s a process. Our effort and attitude has been awesome.”

“I have a lot of respect for Coach Hein, in how they guard defensively, how they play offensively,” Ryan said. “They don’t shoot themselves in the foot with anything. And they have a lot of options, with Leach, Staley and Cosner.

“We’ll have to play well defensively, but they’ll challenge us. Can we keep them out of the paint? That’s a big key for us. If we don’t, it could be a long night for us.”

BNL almost suffered the ultimate in long nights last season, barely escaping with a 56-55 victory at Mitchell. Staley scored 15 points and Cosner added 14, but the Bluejackets battled back and owned a late lead. Michael Bell totaled 25 points, and Mitchell had two shots in the final possession to win.

“Any time you play a county team, you throw the records out the window and go play,” Hein said. “Last year’s game was a great example of that. We were probably supposed to win by more than a point. We were fortunate to get out of there with a win.”

Last meeting: Last year at Mitchell, the Stars escaped with a 56-55 victory. Kooper Staley had 15 points and Ben Cosner added 14 for BNL. Michael Bell scored 25 points for the Bluejackets. Mitchell had two shots to win in the closing seconds.

Game notes: BNL leads the series 45-1 and has won 34 straight against its county rival. Mitchell’s only victory came in 1986.