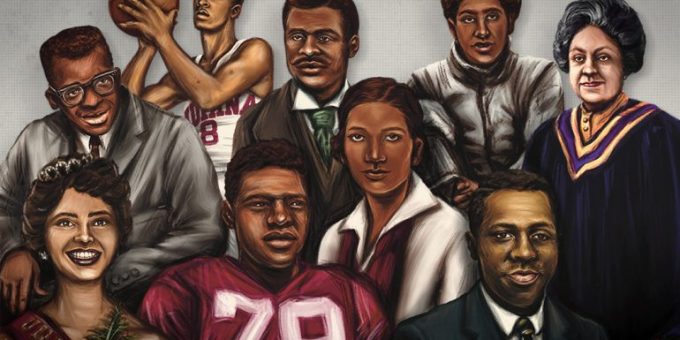 (BLOOMINGTON) – Indiana University was founded in 1820, but it would be more than 60 years before Harvey Young, the first African American student, would step foot on the Bloomington campus. Young would pave the way for the first Black athlete, and eventually, the first Black graduate. However, these triumphs and the many celebrated “firsts” that followed, took place amid extreme racial tension and discrimination. You’ll see those play out in the stories below—many of which were found in the IU Alumni Magazine archives.

Preston Eagleson, BA 1896, MA 1906, became the first African American to participate in intercollegiate athletics at Indiana University. According to local newspapers, Eagleson, who played football for three seasons, was a “standout on the field” despite the racial prejudice he faced. He would later become the first Black student to graduate from IU with an advanced degree—a master of arts in philosophy.

Marcellus Neal, BA 1895, was the first Black student to graduate from Indiana University. He was on campus at the same time as Preston Eagleson, and it’s likely the two were acquainted, but according to the 1895 Arbutus, Neal spent much of his free time with the Married Folks’ Club.

Neal’s historic graduation almost didn’t take place. Find out why in Eye on the Prize.

Frances Marshall Eagleson, BA 1919, was the first Black woman to graduate from Indiana University. Because of this accomplishment, the Neal-Marshall Black Culture Center was named in honor of her and Marcellus Neal in 2002.

Frances, the daughter-in-law of Preston Eagleson, went on to become a sought-after registrar. Read about her career—and her nearly photographic memory—in A Phenomenal Woman.

Bill Garrett, BS’51, was the first Black basketball player to land a spot on the Hoosiers’ roster and regularly play in the Big Ten conference. In June 2020, the intramural center on the IU Bloomington campus was renamed in his honor.

Find out how the basketball star scored a scholarship to IU in Bill Garrett Makes History—Again.

Also in 1949, George Taliaferro, BS’51—well remembered for his role in the desegregation of Bloomington, Ind.—was the first Black player drafted into the NFL. He was originally picked up by the Chicago Bears, but a prior contract with the Los Angeles Dons of the All-America Football Conference prevented him from playing. He would later begin his NFL career with the New York Yanks.

Catch a glimpse of the football standout’s statue outside Memorial Stadium in The Great George Taliaferro.

Nancy Streets-Lyons, BA’62, was the first Black student to be crowned Miss Indiana University. In 2013, she returned to IU Bloomington for the first time in more than 50 years. The hours she spent on campus were documented by Charles Scudder, BAJ’14, a former Indiana Daily Student reporter.

Just a year after Nancy Streets-Lyons made headlines across the country, Thomas Atkins, BA’61, was elected the first Black student body president of IU and a Big Ten university. His legacy lives on through the Thomas I. Atkins Living-Learning Center, located in the Forest Quadrangle Residence Hall on the IU Bloomington campus.

See Atkins’s campaign poster and learn about his triumphs in office in
Doing the Undoable.

Richard Hatcher, BS’56, was elected mayor of Gary, Ind., in 1967—joining Carl Stokes, of Cleveland, as the first Black mayors of major U.S. cities. Before, during, and after his time in office, he fought for social equality as an active member—and eventual leader—of the NAACP.

Read what Rev. Jesse Jackson had to say about Hatcher in Foundational Politician.

Juanita Kidd Stout, JD’48, LLM’54, LLD’66, made her mark on history by becoming the first Black woman in the country to serve as a state supreme court justice. In 2019, more than 30 years after her death, she became the first African American woman with a professorship named in her honor at Indiana University.

Discover Stout’s demeanor behind the bench in Legal Legacy.