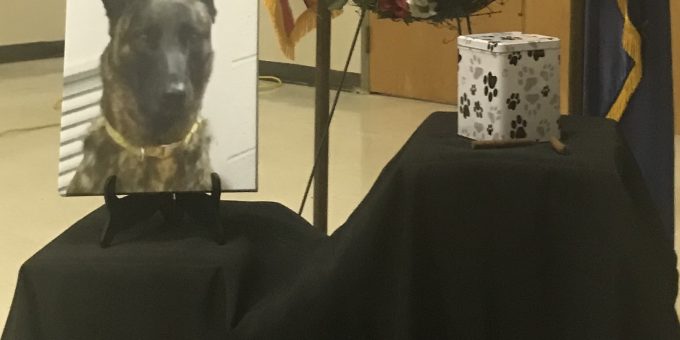 In January, Roxy was diagnosed with Blastomycosis, a fungal disease that infects the respiratory tract. It then spreads throughout the body and infects other organs. Beating the disease is rare.

Captain Hennette knew that he wanted to be a K-9 Officer, but he also understood the decision would need to be something his whole family had to agree on.

“My wife and children were all about it,” said Hennette. “It was the best seven years of my life with this dog, I spent every moment with this dog.”

Captain Hennette and his wife traveled to Louisville Kentucky to make a the final dog choice. Master Trainer Clark showed them five Labrador Retrievers. However, Clark urged them to look at one more dog, a shepherd.

“This dog is easy to handle, meticulous in searching, and will be a rock star for some department,” Clark stated.

Capt. Hennette and his wife Brandi agreed to watch the dog work that day. Once he completed the workout, Roxy picked up her squeaky ball and came right over to the couple.

They both agreed Roxy was the one, but in reality, it was Roxy that chose them.

Roxy was named by the 2nd graders of Loogootee Elementary School students when she became a member of the police department in 2014.

“Roxy always attended weddings and even Christmas parties, whether it was out of town or overnight Roxy insisted on going,” said Hennette.

During her seven years of service, K-9 Roxy was a great asset to the City of Loogootee and Martin County. She not only lent her nose to fight crime but by shared her love and dedication for and with her community.

“When the two of us went to work she would lay down in the back seat of my car until the lights went on. I would leave my car and Roxy would sit up and see what was going on. Keeping an eye out for my safety, watching out for dad,” Hennette describing their friendship.

“This bond, this team most evident in wartime and law enforcement. Where they are used to protect their partner when they face lawlessness,” said Burkhardt. “K-9’s are more than man’s best friend but have become an important part of the law enforcement community. As for both dog, handler, and family, this bond is very special, even sometimes unexplainable.”

Often times an officer and their K-9 spend more time together than they spend with their own family members, creating an indescribable and unbreakable loyal bond.

“There are two words that showed through and through, day in and day out. Those words are friendship and loyalty,” according to Burkhardt. “How many friends do you have, who are they, if you are like most people your friendships range from past acquaintances to those you would even die for. Sometimes friends are closer than brothers or sisters, friends share affection, companionship, and confidence.”

Indiana State Trooper Andrew Beaver, Martin County Sheriff Major Keith Keller and Shoals Town Marshal Todd Eckert also made remarks about being a K-9 officer and the friendships that was made between the officers during the memorial service.

A flag was presented to Captain Hennette by Loogootee Police Chief James Floyd.

The procession route traveled from the Martin County Community Center to the Restoration Church and then finally down JFK Avenue to pass by the final resting place of Roxy on the northside of Loogootee.