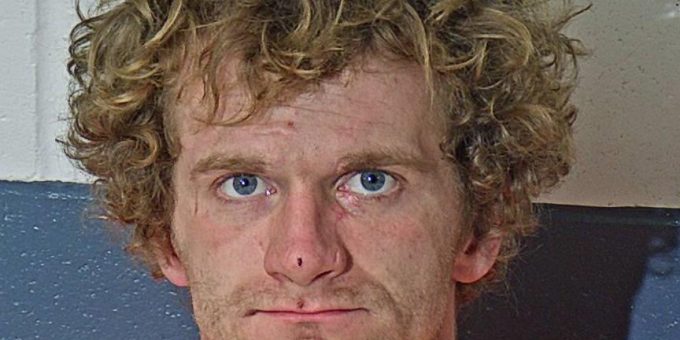 (BEDFORD) – A Mitchell man was arrested on drug charges and disorderly conduct Friday night after a Bedford Police officer was called to the median near the Ford dealership on State Road 37, after a report of a woman in the area with blood on her face.

Police arrested 26-year-old Dallas Knight on charges of unlawful possession of a syringe, possession of a controlled substance, obstruction of justice, and disorderly conduct.

According to a probable cause affidavit, on Friday at 11:51 p.m. the officer found a woman and her boyfriend Dallas Knight in a vehicle with their two small children. The woman of the vehicle suffered injuries to her face causing her to bleed. The on scene officer requested an ambulance.

The injured woman was able to tell police she and her boyfriend had been in an accident.

The officer then used a flashlight to check out the woman for other injuries. Knight told the officer to turn off his flashlight. The officer told Knight he would not. The woman awaited the IU Health Hospital ambulance, remaining inside the vehicle.

While she was exiting the vehicle an officer noticed a catalytic converter partially concealed  by a mattress and blankets in the vehicle.

Due to the recent spike in catalytic converter thefts, the officer asked Dallas to exit the vehicle and speak with him regarding the found item.

Prior to questioning Knight, officer asked to search Knight’s pockets. The officer found a large amount of cash and a syringe. The syringe tested positive for Fentanyl.

Officers reported Knights’ screaming continued during transport to the jail until Knight became “unresponsive”.  The concerned officer stopped his vehicle for a safety check on Knight. It was determined Knight was “faking a seizure”.

The officer transported Knight to St. Vincent Dunn Hospital. Knight told medical staff and the officer he intended to use the found syringe to shoot up meth, but instead swallowed it while dealing with police at the scene.

After being cleared at the hospital, Knight was transported to the Lawrence County Jail on charges of possession of a narcotic drug in the presence of a minor, unlawful possession of a syringe, obstruction of justice, and disorderly conduct.