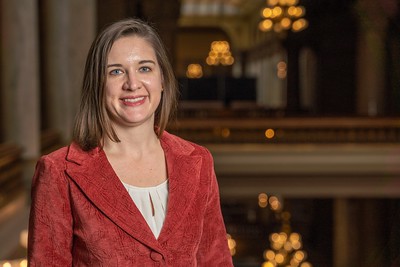 (INDIANAPOLIS) – Governor Eric Holcomb Friday announced that he has selected Jessica Allen to serve as the Chairwoman of the Indiana Alcohol and Tobacco Commission.

“Jessica’s years of experience with the Alcohol and Tobacco Commission, and working with the tutelage of Dave Cook, has prepared her well for her new role,” Gov. Holcomb said. “I’m confident under her leadership the commission will continue to ensure fair and just proceedings, protect public health and safety, and maintain strong relationships with the business community.”

Allen currently serves as the executive secretary of the ATC. The Commission is responsible for regulating and licensing the alcohol and tobacco industries. The ATC also directs the Indiana State Excise Police. Allen advises on legal matters while also serving as an administrative hearing judge and overseeing all litigation matters for the agency. During her time with the commission, Allen has spearheaded licensing system updates to provided customer service improvements and streamlined permit processing procedures. These changes have resulted in cutting permit processing time in half.

Allen will begin her new role Monday. She replaces David Cook, who will begin his tenure as Inspector General on Monday.