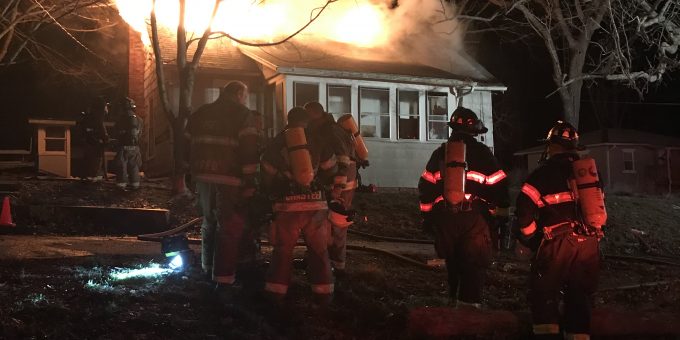 (BEDFORD) – A home in the 300 Block of South Leatherwood Road was extensively damaged following a house fire Saturday night.

Firefighters from Shawswick and Pleasant Run Townships were called to the fire at 6:56 p.m.

Marion Township and Oolitic Fire Department were also requested to the scene to bring more manpower and water to battle the blaze.

When firefighters arrived they found heavy smoke coming from the attic. Firefighters made entry to the home to fight the blaze from the inside. Double ceilings in the home made it difficult for made firefighters to get to the blaze.

Due to the lack of fire hydrants in the area, the fire departments shuttled several gallons of water to the scene, taking firefighters almost two hours to get the fire under control.

Jeanie Walls, Cathy Woods and three children were at the residence when the fire started.

Walls was concerned about a cat, that was inside the home. When firefighters first arrived they were able to rescue the cat.

The fire destroyed the home and all contents within the home.

“We believe the cause of the fire was electrical with bare-nail wiring located throughout the home,” said Shawswick Fire Department firefighter J.D. Ramsey.

The American Red Cross was contacted to provide the occupants of the home a temporary place to stay.