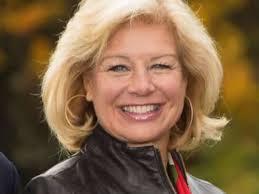 Susan, 61, died surrounded by her family in McLean, Virginia, a suburb of Washington, D.C.

“Janet and I were saddened to learn about the passing of former First Lady Susan Bayh. She was an extraordinary and radiant public servant, wife, mother, and friend, who leaves a remarkable impact on our state and nation. I ask all Hoosiers to join us in praying and being there for the Bayh family.”

Her family shared this video on Saturday on YouTube.

Her husband, a Democrat, was governor from January 1989 through January 1997, after he’d served four years as Indiana’s secretary of state. She was the 46th “First Lady of Indiana” and was the youngest in 150 years to assume the role at age 29.

She was Miss Southern California 1978; that’s the same year she was a princess in the Rose Bowl Parade.

Susan earned her law degree from the University of Southern California Law School in 1984 and later worked for law firms in Los Angeles and Indiana, handled federal regulatory issues for Indianapolis-based pharmaceutical giant Eli Lilly & Co., served on several corporate boards, and taught at and became a trustee of Butler University.

In 1994, President Bill Clinton appointed Susan to the International Joint Commission. She served six years addressing issues between Canada and the United States. Evan served as one of Indiana’s U.S. senators from January 1999 to January 2011.

Susan’s battle with cancer was first revealed in May 2018 when she underwent surgery for malignant brain cancer. She began chemotherapy and radiation therapy following the surgery.

She is survived by her husband; their twin sons, Nick and Beau; her parents, Bob and Carol Breshears; her siblings, Bob Jr., Ann and Linda; and numerous nieces and nephews.

A memorial service will be held when health conditions allow. In lieu of flowers, the Bayh family requests that contributions be made to the Bayh Family Scholarship through the Paul H. O’Neill School of Public and Environmental Affairs School at Indiana University.