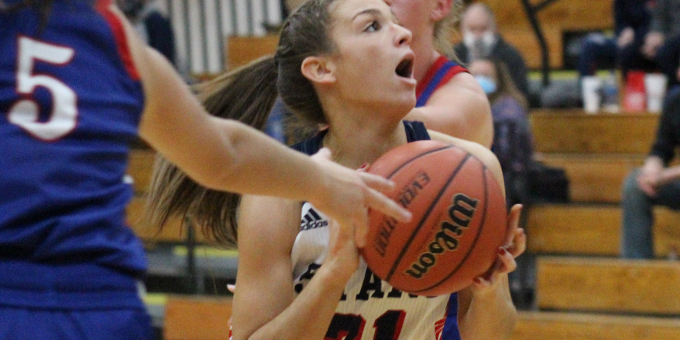 NEW ALBANY – On the rating scale, Bedford North Lawrence is chasing the perfect “10.” The Stars are one victory away from defending a coveted title and extending a dynasty.

No.3 BNL will battle Jennings County for the Class 4A Sectional 15 championship on Saturday night, seeking its 10th consecutive title. In the class basketball era, which started in 1998, that would be a remarkable achievement.

The crown will not be retained without a test of worthiness. While the Stars (20-2) have won 29 straight sectional games, the Panthers (16-6) have a score to settle. They have not forgotten last year’s 64-32 beating in the sectional final at Jennings. Revenge would be sweet.

BNL won the regular-season collision on Dec. 1 at BNL, scratching out a 52-44 triumph as Irye Gomez scored 16 points. The Stars pushed their winning streak in the series to 20 straight, another reason the Panthers would love to end BNL’s domination.

Jennings has the firepower to do that. Freshman center Juliann Woodard is a force in the paint, and senior guard Addyson Kent is an explosive perimeter shooter. The Stars have evidence of both. Woodard, an athletic 6-footer, scored 18 points in her first clash with the Stars. Kent, who erupted for 27 against BNL in last season’s regular-season meeting, drew special defensive attention and was limited to 3 points on 1-of-11 shooting. She’s far better than that.

“They’ve got a couple of really nice pieces,” BNL coach Jeff Allen said. “The big girl is a handful for us. She’s a very nice player. I really like her game. We’ll have to make sure we’re playing well on post defense. You have to find Kent and not leave her any space, but those other kids are making shots. They cause you some problems.”

Kent couldn’t make a move without a BNL shadow in the December meeting, but that left interior room for Woodard. And she was impressive while hitting 8 of 10 shots and grabbing 7 rebounds. Brooke Mowery added 10 points.

“She’s had an outstanding freshman season, the maturity she’s had,” JC coach Kristi Sigler said. “Her basketball IQ is just there. She’s a special player to coach.”

BNL didn’t shoot well that night. BNL’s top two scorers this season – Chloe McKnight and freshman Chloe Spreen – were a combined 4-of-20. But Gomez got loose, McKnight had 9 points and 8 rebounds, and BNL got 14 points from its bench.

Jennings was guilty of 17 turnovers, and that’s Sigler’s top priority for the rematch.

“When you play Bedford, you have to take care of the basketball,” she said. “That’s the No.1 focus. Take care of it.

Both teams were off their usual excellence during the Friday night semifinals. Jennings topped Floyd Central 44-32, while BNL needed a late charge to deck Jeffersonville 62-36. Perhaps both were a little guilty of peaking ahead.

The winner will advance to the two-game regional at BNL on Feb. 13.

Last meeting: On Dec. 1 at BNL, the Stars posted a 52-44 victory. Irye Gomez had 16 points for BNL, while Juliann Woodward totaled 18 points and 7 rebounds for the Panthers.