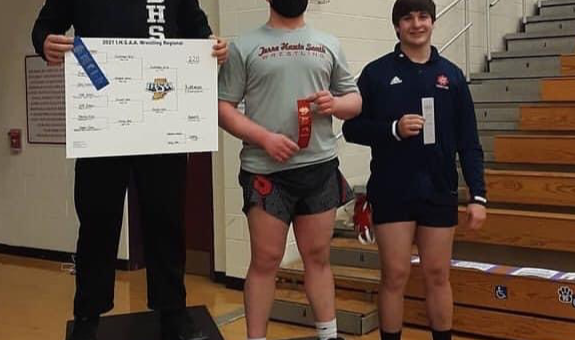 BLOOMINGTON – Bedford North Lawrence senior James Covey advanced to the IHSAA semistate with a third-place finish at 220 pounds during regional action at Bloomington South on Saturday.

Covey qualified for the third stage of the state tournament series for the second straight year. The top four in each regional weight class moved on to the semistate at Jasper on Feb. 13.

Covey (27-3) started the day with a pin of Edgewood’s Marley Klick in 53 seconds. He suffered a loss to Terre Haute South’s Josh Howell in the semifinal round, with Howell recording a pin in 41 seconds.

Covey was awarded third place in the consolation round when North Knox’s Beau Noland – who Covey defeated to win the sectional title at Southridge last week – withdrew with an injury following the first round.

“We came into today knowing the competition was going to be tough,” BNL coach Chris Branam said. “James came out in the first round and made quick work (of Klick). In the second round, we ran into a tough opponent. Unfortunately, we didn’t come out on top.

“James is a great wrestler, but he knows there are areas where he can still improve and that’s what we’ll focus on as he heads to the semistate.”

BNL’s Gunner Connaughton (14-10) fell in the first round at 195 and failed to advance. Owen Valley’s Eli Hinshaw caught Connaughton with a pin in 1:31.

“Gunner ran into a really tough opponent,” Branam said. “We had lost to Hinshaw on senior night (at BNL), so we knew it was a tough draw. Gunner went out and wrestled hard in spite of suffering a shoulder injury in the midst of the match.

“I’m proud of the season Gunner has had. We look forward to his senior year and wish him a speedy recovery with his shoulder.”