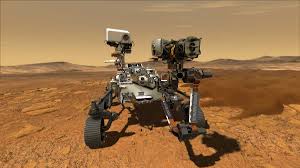 (WEST LAFAYETTE) – The Mars Perseverance Rover will fly 300 million miles over almost seven months, but the seven minutes spent waiting to receive a radio signal confirming the rover has landed will seem like an eternity for scientists and researchers back on Earth.

That wait is dubbed the “seven minutes of terror” and Briony Horgan, Purdue University associate professor of planetary science, calls it the scariest moment of the mission.

“The rover descends in a plasma fireball through the Mars atmosphere and has to slow down from about 12,000 miles per hour to zero in about seven minutes, so it is a pretty scary endeavor,” said Horgan, who has played a key role in the mission, including leading research on the geology of the landing site.

Horgan talks about the seven minutes of terror in the video below.

The NASA rover Perseverance is expected to touch down on Mars around Feb. 18. It launched on July 30 from Florida’s Cape Canaveral Air Force Station.

The rover will land in Jezero Crater, just north of the planet’s equator. The crater used to contain a lake and large river delta. Horgan led mineralogy research for the mission and her team’s important finding on the location contributed to the selection of Jezero Crater. She also is on the rover camera team that will be the scientific eyes for Perseverance.

Horgan’s research and a presentation led NASA to select the rover landing site.

For the six and a half months between launch and landing, Horgan and the Mars team have been working consistently on preparations for when the rover reaches the red planet. Plans are being made for where the rover will go and what it will do in the Jezero Crater, ranging from collecting samples to looking for ancient signs of life and understanding the planet’s geological processes.

Extremely detailed maps of the crater terrain will help make the decisions.

“This is a great opportunity for both me and my students to get involved with planning what the rover does day to day,” Horgan said. “We’re doing a lot of operations tests and working out the kinks in software, learning how to work together as a team.

“We’re really excited for the rover to hit the ground running but, hopefully, not hit it too hard.”