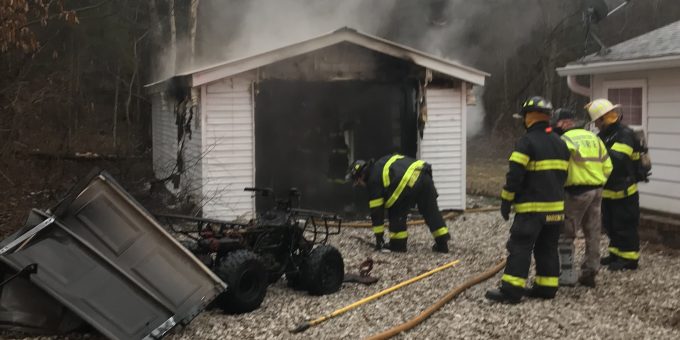 (MITCHELL) – The Marion Township Volunteer Fire Department responded to a garage fire Thursday afternoon in the 1200 block of Noe Road.

Firefighters from Marion and Mitchell Volunteer Fire Departments were called to the fire at 2:24 p.m. after a report of a garage fire close to a house.

“Upon arrival, Marion crews began extinguishing the garage fire that was located six feet from the actual residence,” said Dane Fountain, Marion VFD assistant chief. “We were able to get a quick knockdown and contain the fire to the garage with zero damage to the home. The garage and its contents were a total loss. At this time the fire remains under investigation but we believe a heat lamp may have been left on. We will have further details at a later time.”

The residents of the nearby home were evacuated in case the fire spread to the residence.

Orange County REMC was contacted to disconnect the power.

There were no injuries reported.

A Seals Ambulance crew remained on scene until the fire was under control.