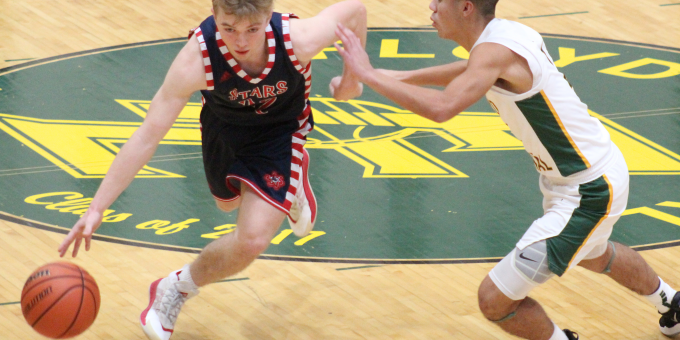 BEDFORD – The first trip to unknown, unfamiliar territory is always done with caution, with tentative steps and vigilance of the potential dangers.

That’s Bedford North Lawrence’s mindset as the Stars make their first appearance at Evansville Memorial for a Saturday matinee meeting.

While BNL has historically made many journeys to the Pocket City, this is the debut on Memorial’s home floor. BNL coach Jeff Hein, who coached at Boonville, Bosse and Vincennes Lincoln before arriving to guide the Stars, has made many trips to this unfriendly destination. He is sounding the alarm bell.

The Stars won last year’s clash at BNL Fieldhouse, playing superb defense in the second half while caging the Tigers 54-40. Brayton Bailey had 22 points, Ben Cosner hit 4 treys en route to 18, and BNL allowed only two fields goals in the second half.

“Defense been our strong point,” Hein said. “Down there, it will be difficult to do that. They’re more well rounded this year.”

“I don’t think the style has changed a lot,” Hein said. “They’re really aggressive in their man-to-man defense, they’ll compact the lane.”

Both teams are in rebound mode after tough losses on Thursday. The Stars dropped a 61-38 decision at Floyd Central, while the Tigers suffered a 68-62 setback at Evansville Reitz.

Last meeting: Last year at BNL, the Stars prevailed 54-40. Brayton Bailey had 22 points and Ben Cosner totaled 18 for BNL. Connor Quick had 13 points for the Tigers.