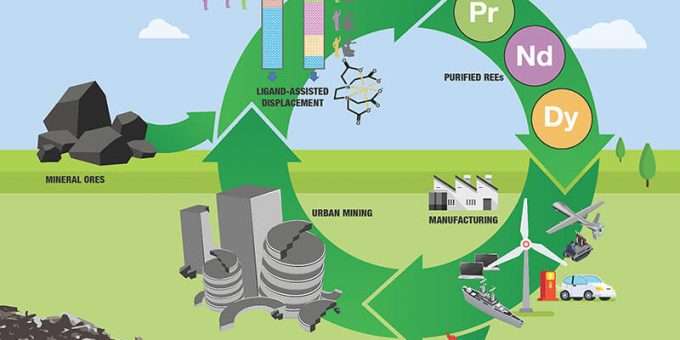 The environmentally safer method uses ligand-assisted chromatography for separation and purification of rare-earth and other critical elements from coal, coal byproducts, recycled permanent magnets and lithium ion batteries. The technology was developed in the laboratory of Linda Wang, Purdue’s Maxine Spencer Nichols Professor of Chemical Engineering.

American Resources, a next-generation and socially responsible supplier of raw materials to the new infrastructure marketplace, has licensed ligand assisted displacement (“LAD”) chromatography patents and know-how to further expand its capability in environmentally friendly separation and purification of rare-earth elements.

These exclusive patents and technologies, developed at Purdue, are specific to the processing of separated and pure rare-earth and other critical elements from coal byproducts, recycled permanent magnets and lithium-ion batteries. The agreement will enable American Rare Earth LLC, a wholly owned subsidiary of American Resources Corp., to further develop and construct a much-needed environmentally safer domestic supply chain of critical materials.

Hasler Ventures was formed by Dan Hasler, who retired from Purdue University in March 2020. At that time, Hasler Ventures optioned the technology. Hasler served Purdue as executive vice president for communications and previously served five years as president of Purdue Research Foundation, where he became familiar with Wang’s work.

“Linda has dedicated more than 10 years of research to developing this process and her innovation is one of the most promising and environmentally safer methods to separate and purify rare-earth metals,” Hasler said. “There is a lot of interest in this technology because it could support the U.S. domestic supply chain to more safely purify this critical resource currently done almost exclusively in China, which makes us dependent on them even though we have the raw materials available in the U.S.”

Rare-earth elements (REEs) include the 15 elements in the lanthanide series plus scandium (Sc) and yttrium (Y). They are essential ingredients for magnets, metal alloys, polishing powders, catalysts, ceramics, and phosphors, which are important for high technology and clean energy applications. The global REE market is estimated at approximately $4 billion and is growing at 8% per year.

“We’ve long been proud of Professor Wang and her research,” Purdue University President Mitch Daniels said. “If this comes to fruition, it could be a very vital new asset in protecting our country’s national security and manufacturing competitiveness.”

American Resources’ agreements with Hasler Ventures come in the form of two exclusive licenses: Technologies for the separation and purification of rare-earth elements from coal, coal byproducts, coal waste and acid mine drainage, utilizing LAD chromatography, and technologies for the extraction and purification of rare-earth and critical elements from used or waste permanent magnets and batteries. Both technologies will be used by American Rare Earthto further develop its proprietary process chain for domestic commercialization and production of rare earth and other critical elements

The use of LAD chromatography to segregate and purify rare-earth and critical elements from coal byproducts is the most cost-efficient and environmentally safe method utilized to date.  LAD chromatography as designed for rare-earth element extraction and purification is a much cleaner and greener purification process compared with conventional solvent-based extraction methods. It has a higher yield, productivity and efficiency allowing for smaller processing volume without the harsh and toxic solvents. When used to clean up decades of coal waste and coal byproducts, it yields a triple benefit for the environment.

Waste magnets make an incredibly efficient feedstock for the recycling of magnet rare-earth elements including neodymium (Nd), praseodymium (Pr), samarium (Sm), terbium (Tb) and dysprosium (Dy), given that they carry an approximate 25%-35% weight of rare-earth oxide, have a very simple mineral composition and are considered a super-grade ore. It is estimated that approximately $3 billion worth of rare-earth elements ends up in landfills annually given the disposition of end-of-life products. Thus, the recycling and reducing to the pure elements in permanent magnets and batteries from sources such as hard disk drives, electric vehicles, nuclear magnetic resonance machines and wind turbines significantly reduce waste that goes into landfills, reduces the mining-based environmental impact, and mitigates the supply chain risk.

Mark Jensen, CEO of American Resources, said, “Working with Purdue and Hasler Ventures to commercialize such an impressive suite of technologies that are of major importance to national security and the growth of the electrification marketplace is an honor for our company. Their teams have been nothing short of amazing, as they have fully embraced the need to rapidly scale to a commercial process to produce rare-earth and critical elements from available domestic sources. It is our shared belief that to compete in the world markets and to establish a robust domestic source of rare-earth metals, the United States cannot solely rely on the current costly and environmentally harming methods of solvent-based extraction. Linda Wang’s method represents this path.”

Wang said, “We’re excited about partnering with American Rare Earth and American Resources on the implementation of our research. We look forward to working with their team on the design of a pilot production facility and an eventual full-scale production plant.”

In connection with the exclusive patent licenses for its fields of use, American Resources has committed to a three-year sponsored research program with Purdue and Wang to continue advancement of the technologies. Work between American Resources and Purdue will commence immediately. In addition, Dan Hasler, founder and president of Hasler Ventures, will represent American Resources in subsequent sub-licensing and partnership opportunities and as an advisor to the company.

American Resources Corp. is a next-generation, environmentally and socially responsible supplier of high-quality raw materials to the new infrastructure market. The company is focused on the extraction and processing of metallurgical carbon, an essential ingredient used in steelmaking, critical and rare earth minerals for the electrification market, and reprocessed metal to be recycled. American Resources has a growing portfolio of operations located in the central Appalachian basin of eastern Kentucky and southern West Virginia where premium quality metallurgical carbon and rare-earth mineral deposits are concentrated.

American Resources has established a nimble, low-cost business model centered on growth, which provides a significant opportunity to scale its portfolio of assets to meet the growing global infrastructure and electrification markets while also continuing to acquire operations and significantly reduce their legacy industry risks. Its streamlined and efficient operations are able to maximize margins while reducing costs. For more information, visit americanresourcescorp.com or connect with the company on Facebook, Twitter, and LinkedIn.

Hasler Ventures believes that the key to a secure domestic supply chain of rare-earth metals and strategic independence in rare-earth metals from China is the ability to separate, and purify in an economical, environmentally friendly way. Purdue University invented and patented Ligand -Assisted Displacement Chromatography offers this capability to U.S producers of both recycled and ore-sourced rare-earth metals.

The Purdue Research Foundation Office of Technology Commercialization operates one of the most comprehensive technology transfer programs among leading research universities in the U.S. Services provided by this office support the economic development initiatives of Purdue University and benefit the university’s academic activities through commercializing, licensing and protecting Purdue intellectual property. The office recently moved into the Convergence Center for Innovation and Collaboration in Discovery Park District, adjacent to the Purdue campus. The office is managed by the Purdue Research Foundation, which received the 2019 Innovation and Economic Prosperity Universities Award for Place from the Association of Public and Land-grant Universities. In 2020, IPWatchdog Institute ranked Purdue third nationally in startup creation and in the top 20 for patents. The Purdue Research Foundation is a private, nonprofit foundation created to advance the mission of Purdue University. Contact otcip@prf.org for more information.