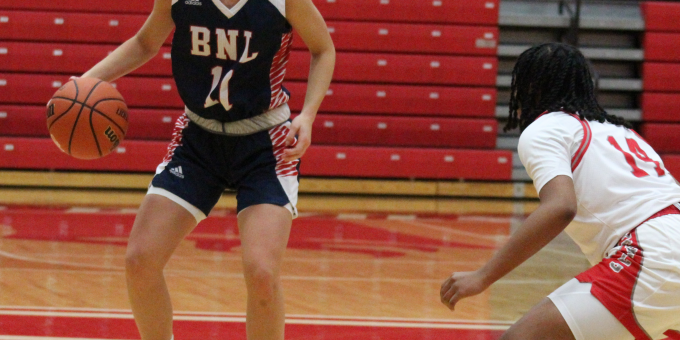 BEDFORD – Live by the sword, die by it. That’s the old proverb, proven true countless times. For Bedford North Lawrence, the sharpened blade of choice has been the 3-point shot. Jeffersonville found out just how deadly that weapon can be in the hands of masters.

When the Stars invaded Johnson Arena on Dec. 8 for the regular-season clash with the Red Devils, they spewed the fire of dragons, leaving scorched earth behind them while hitting a school-record 18 treys. Guess what the Devils have made their top priority for the rematch?

The sword fight will take place 20 feet from the basket when No.3 BNL (19-2) duels with the Devils (6-11) in the second sectional semifinal at New Albany on Friday night. Jennings County (15-6) will collide with Floyd Central (7-14) in the first semifinal, with the winners to meet in the championship on Saturday night.

BNL’s firestorm that night was awesome. Chloe McKnight and Karsyn Norman hit five apiece, Chloe Spreen swished four to highlight the barrage. When the smoke cleared, the Stars were 84-37 victors. And when reminded of those 18 bombs that landed, BNL coach Jeff Allen joked “We’ll try for 19.”

Jeffersonville coach Missy Voyles will start her defensive game plan for the rematch by circling the 3-point arc.

“You can’t give threes,” Voyles said. “You have to get out on their shooters, you have to pressure that and make them do something else. You can’t give the dead-eye look because they’re just phenomenal outside shooters. Every single drill we’ve done this week, it’s get hands up on the shooters. We’ll do what we can to prepare for them.”

McKnight and Irye Gomez have made 40 percent from long range.

“We’ve cut down on our turnovers, and hopefully we’ll continue to do that into the sectional,” Voyles said. “I’ve been pleased with our ballhandling the last couple of weeks, we’ve been smarter about what we’re doing.

“I’m proud of our kids. We’ve had a ton of injuries this year, we just keep rolling. Considering the adversity and as young as they are, they’ve progressed a lot.”

Jeffersonville does have momentum of solid play the last two weeks. The Devils pushed Jennings County before falling 61-53, then conquered New Albany (54-40) and Scottsburg (55-51) prior to the tournament.

“We played well down there, but it’s been a while since we’ve seen them,” Allen said. “I’m sure they’ve gotten better. It will be us playing well on the defensive end. If we do that, we can dictate what we need to do on the offensive end.

Jennings County vs. Floyd Central: In the first semifinal, the Panthers will seek a season sweep of the Highlanders after they cruised to a 55-25 victory on Jan. 26. JC freshman Juliann Woodard was the dominant force that night with 22 points, and she scored 25 during Jennings’ opening-round win over Seymour on Tuesday.

Game notes: BNL owns a 28-game sectional winning streak, the 10th longest in state history. The school record is 42 straight (which ended in 1998). BNL has beaten Jeffersonville 7 consecutive times in postseason play. The Devils won their last sectional in 2011 (the year they won the state championship).

Last meeting: On Jan. 26 at Jennings County, the Panthers rolled to a 55-25 victory. Juliann Woodard had 22 points and Addyson Kent added 12 for JC. Keegan Kaiser had 8 points for the Highlanders.

Game notes: Jennings County won its last sectional title in 2005, while Floyd Central won its last in 2010. The Highlanders haven’t won a sectional game since 2013.