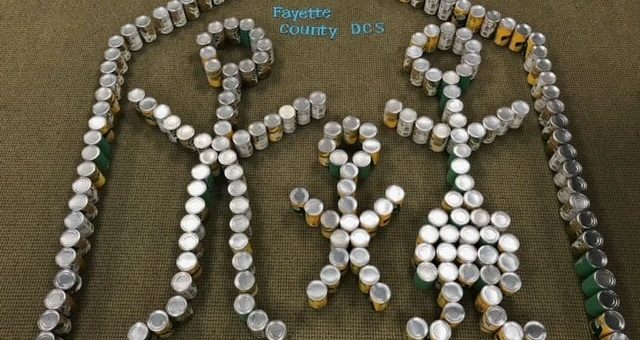 Using canned goods and art supplies, the teams got creative and paid tribute to famous works of art, Hoosier landmarks, state initiatives, pop culture icons, and much more. Check them out at the link below:

Nine Indiana Department of Child Services teams combined to collect the most canned goods, finishing with an impressive total of 6,737. The DCS team from Madison County (“MADCO Fo’ Sho'”) had the highest single-team tally with 2,526 canned goods collected. They used those cans to create a tribute to the state’s “Mask-Up, Hoosiers” initiative.

A DCS Staff Development team elected to collect cash in lieu of building a Canstruction and ended up with $465 to donate to Gleaners Food Bank!

All 2021 Canstruction Competition entries were creative and clearly crafted with a lot of heart, but there was one entry that received the most “buzz” among the contest’s four judges– Gov. Eric Holcomb, Indiana State Fair Executive Director Cindy Hoye, Indiana State Personnel Department Director Matt Brown, and a special guest food pantry judge.

Noble County DCS created an enormous beehive (seen below) that highlighted the Indiana Foster Care program. It utilized 559 canned goods, which were later donated by the team to the Central Noble Food Pantry.

In all, 20 different food pantries throughout The Hoosier State will be the recipients of the generosity on display in the 2021 Canstruction Competition. These donations are especially important at this time, as the need for nonperishable goods typically increases during the holidays and many food banks begin the year with empty shelves.