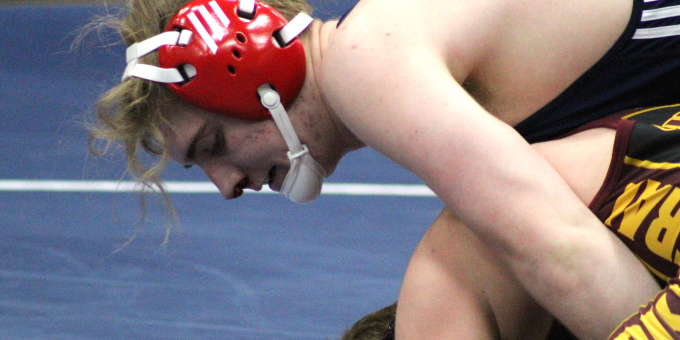 BEDFORD – The focus has been narrowed to six minutes – or less. The task is simple, although not necessarily easy at all. Win and advance. Lose and head home.

Bedford North Lawrence’s Gunner Connaughton and James Covey will compete in the IHSAA regional at Bloomington South, needing only a first-round victory to qualify for the semistate on Feb. 13. After that tense opener, the rest of the second stage of the state tournament series is earning seeding as the top four move on to the third round at Jasper.

Connaughton, 14-9 at 195 pounds after finishing third in the sectional, will meet Owen Valley’s Eli Hinshaw (22-5) in his do-or-die opener. Covey, the sectional champion with a sparkling 25-2 record, will battle Edgewood’s Marley Klick (15-11) in the first round at 220.

For Connaughton, the motivation is revenge. He has faced Hinshaw twice in his career, the latter time a regular-season clash at BNL on Jan. 14. Hinshaw stunned him with a quick move and recorded a pin in 32 seconds. The rematch will require a different strategy.

“I will come in more prepared,” said Connaughton, who is making his second straight regional appearance. “I need to distance myself, focus on my own wrestling instead of his way. I have a layout of his main moves and how to defend him. I’ve been working on a lot of things, running a lot of moves. So I’m very excited about this match.”

Covey finished third in last year’s regional, which pushed him to a lower semistate seed. He’s looking for a better performance, and an opening win, to strengthen his position.

“Every match he wins just improves his chance to get to state,” Branam said. “Every little advantage you can give yourself, you take it. With the way he wrestled Saturday (in the sectional at Southridge), I think he has a real good chance to get to the finals. He came out on fire.”

Covey will not look past Klick, who finished fourth in the sectional at Bloomington, in the opener. He can’t afford a lapse.

“I look forward to each match, one at a time,” Covey said. “I’m pretty happy with how I’m wrestling. I will go into it like every other match, set my goals and achieve it. I push to achieve.”

“You have to respect everybody,” Branam said. “Just take it one match at a time, stay focsued and bring that energy from the get-go.

“People expect the top seed to win. The big thing is remembering the same thing, the match starts 0-0. It does not matter, anything that happened before, it’s a blank slate. He has to have no fear, no hesitancy, treat it as another opponent. You have to have a short memory.”