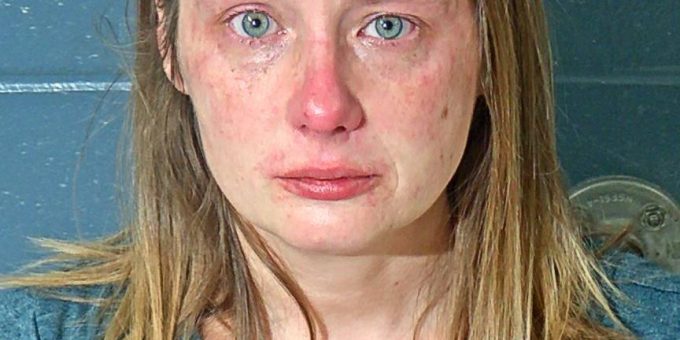 (BEDFORD) – A Williams woman was arrested on a warrant Monday, after she allegedly attacked a police officer on August 19, 2020.

According to a probable cause affidavit, at 12:56 p.m. two Lawrence County Sheriff’s Department deputies responded to IU Health Bedford Hospital to perform a court order to transport 36-year-old Natasha Goode to Meadows Hospital in Bloomington.

When officers arrived Goode refused to leave until her sister arrived. Officers informed Goode they were unable to wait.

Goode proceeded to get out of bed, approach a deputy and ran out of the room.

Officers pursued her and ordered her to stop, but she refused to stop.

During transport, Goode pulled her hands through the handcuffs and unbuckled herself. She then attempted to reach toward the deputy through the cab window of the transport vehicle. The officer pulled over to restrain Goode once again.

While restraining Goode in handcuffs, Goode bit the officers arm and refused to release the bite. Once she released the bite she grabbed his taser. Goode refused to let the taser go and again attempted to bite the officer in the arm.

The deputy was able to gain control of Goode and called for assistance.

After assistance arrived, officers were able to place Goode back into the police car and she was transported to Meadows Hospital with another police officer following.

The information on the incident was forwarded to the Lawrence County Prosecutor’s Officer and a warrant was issued for Goode’s arrest.

She is facing charges of battery resulting in injury to a public safety officer, disarming a law enforcement officer, and resisting arrest.