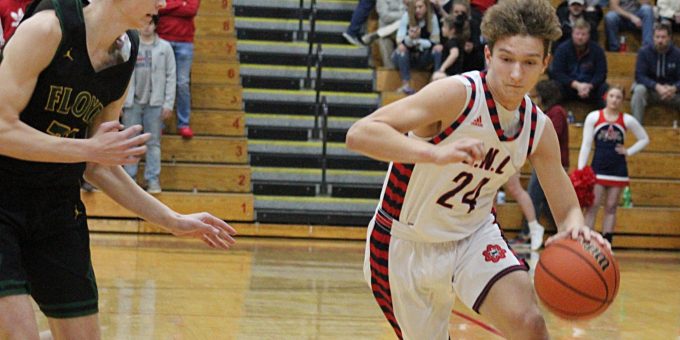 Heidbreder and the soaring Highlanders are climbing high into the sun, 9-2 with an impressive 6-game winning streak, as they prepare to face Bedford North Lawrence on Thursday night.

The Highlanders have gotten off the ground since solidifying their lineup. Before the holidays, Floyd was struggling with continuity and fell to 3-2 after a 55-40 loss at Bloomington South. After a three-week break, Floyd has taken off.

“I think we’re playing pretty well right now,” FC coach Todd Sturgeon said. “As a coach you’re always nit-picking on how to get better. But when I look at the way we were playing right before Christmas, compared to now, it’s a big difference.

“Before Christmas, like a lot of teams dealing with COVID, we never had the same lineup. We were always missing someone. With the guys we thought would be our starting lineup, that’s who we’ve had the last six games.”

The main guy is Heidbreder. Although his scoring average is down slightly (currently 18.0) from a year ago, his efficiency and overall production has jumped.

“Let’s face it. When you have a Div. I guard on your team, that solves a lot of problems as a coach,” Sturgeon said. “This team has a little more balance. We were all standing around watching and waiting for Jake to get 30, and we didn’t play well that way. His numbers have skyrocketed the last six games. He’s been incredibly efficient.”

Floyd has gotten contributions of late from junior Brady Moore (10.0), who scored 16 points in a win over Seymour and 18 during an impressive road victory over Evansville Reitz, and sophomore Caleb Washington (10.0). But BNL’s radar will be locked on Heidbreder.

“He can score in a variety of ways,” BNL coach Jeff Hein said. “The thing about it is he doesn’t care if he scores or not. He just wants to win. You can tell that by the way he plays. It’s very obvious he’s the team leader and the coach on the floor.”

“Colten Leach made some big plays in that game, two or three steals in the fourth quarter that turned the tide,” Hein said. “We kind of surprised them a little bit. I think we woke them up. They played really well after that and won the sectional.”

Yes, the Highlanders won the 4A sectional at Seymour, taking the title for the first time since 1989, but that celebration turned bittersweet when the IHSAA was forced to shut down the state tournament the next week as the full effects of the virus pandemic hit hard.

The Stars (7-8, 3-2 in the league) will counter with its defensive toughness (allowing only 51.9 points per game) and its offensive patient. That’s a word Hein hollers from the sideline on a regular basis. Leach leads the Stars in scoring at 12.7, followed by Kooper Staley (10.9) and Ben Cosner (10.7).

“One things that really concerns is they are really disciplined offensively,” Sturgeon said. “They don’t take many bad shots. They’re happy to play in a low-possession game. We’re not really anxious to guard them for a minute and half every possession. They present a challenge at the defensive end.”

Last meeting: Last year at BNL, the Stars rallied from an 8-point deficit in the fourth quarter for a 49-43 triumph. Brayton Bailey had 21 points and Kooper Staley added 14 for BNL. Jake Heidbreder and Grant Gohmann had 15 points each for the Highlanders.