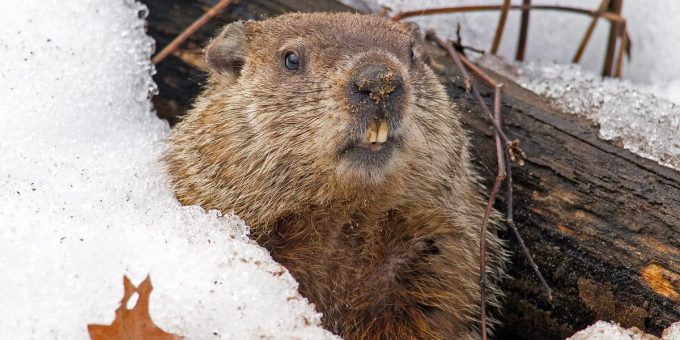 (UNDATED) – Groundhog Day is tomorrow, will there be six more weeks of winter?

Only a groundhog named Punxsutawney Phil knows for sure. Each year on Groundhog Day, people flock to Gobbler’s Knob in Punxsutawney, Pennsylvania, to await the forecast of the local rodent celebrity.

Originating with German settlers, who came to Pennsylvania in the 1700s and brought their seasonal superstitions with them, legend has it that if Phil sees his shadow on Tuesday, the winter chill will continue. Oddly, if the weather is cloudy and he doesn’t see his shadow, we can expect warmer temperatures and early spring.

The Dachs were German-speaking immigrants who settled in Pennsylvania. They developed their own take on the legend of Candlemas in the 18th and 19th centuries bringing with them the custom of the native Groundhog as their annual weather announcer.

The Christian religious holiday of Candlemas Day has become most commonly associated with the current celebration, but its roots are older than that. The celebration started in Christianity as the day, (February 2nd), when Christians would take their candles to the church to have them blessed. This, they felt, would bring blessings to their household for the remaining winter. As time rolled on the day evolved into another form. The following English folk song highlights the transition to weather prognostication.

If Candlemas be fair and bright,
Come, Winter, have another flight;
If Candlemas brings clouds and rain,
Go Winter, and come not again.

This “interpretation” of Candlemas Day became the norm for most of Europe. As you can read, there is no mention of an animal of any kind in the preceding song. It wasn’t until this traditional belief was introduced to Germany that an animal was introduced into the lore, hence another evolution of February 2nd.

If according to German lore, the hedgehog saw his shadow on Candlemas Day there would be a “Second Winter” or 6 more weeks of bad weather. As German settlers came to what is now the United States, so too came their traditions and folklore. With the absence of hedgehogs in the United States, a similar hibernating animal was chosen. This leads us to yet another evolution in the legend and to present-day Punxsutawney.

The first-ever Groundhog Day was created by a local newspaper editor Clymer Freas around 1886, who convinced Groundhog hunter and local businessman, and all members of his Punxsutawney Groundhog club on the idea of Groundhog Day. Together, they all made their way to Gobbler’s Knob where the Groundhog would make the final decision on the weather. Today, a group called the inner circle who wear top hats, conduct the official proceedings on February 2 in a Pennsylvania Dutch dialect, where tens of thousands of people attend the day’s events every year.

Studies have proven no strong correlation between a Groundhog spotting its own shadow and the arrival of spring subsequently. According to German lore, the badger known as Dachs is their forecasting animal. A separate version of traditions states that clear weather on the holy Christian day of Candlemas would often prohibit winter being prolonged.