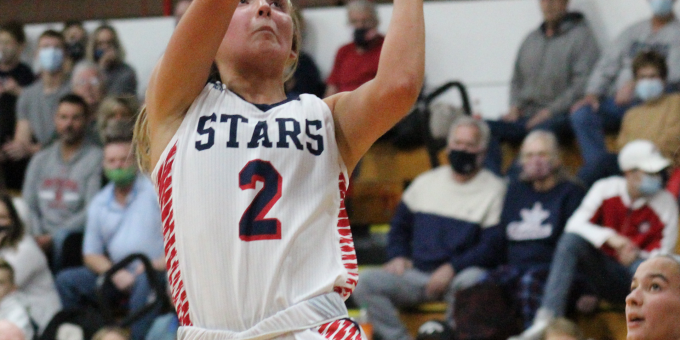 BEDFORD – Seven was heaven. Eight was great. Nine was divine. Winning 10 straight Class 4A sectional championships? X will mark that spot in history.

Bedford North Lawrence, the Roman Empire of girls basketball, will start its quest for the decagon title on Tuesday night when the third-ranked Stars (18-2) face New Albany (6-15) in the second game of New Albany’s Sectional 15.

Jennings County (14-6) will meet Seymour (10-9) in the opener at 5:30 p.m. That winner will clash with Floyd Central (7-14) in the first semifinal on Friday, while the BNL-New Albany victor will collide with Jeffersonville (6-11) in the second game. The championship is set for Saturday at 6 p.m.

The Stars are approaching state records with this dynasty. Rushville holds the mark with 18 consecutive crowns (1980-97) and 31 overall. BNL is chasing its 30th trophy, and it is the overwhelming favorite to accomplish that feat. It’s a status, and target, the Stars expect and take in stride.

“We like having the target on our back,” BNL coach Jeff Allen said. “That means we’re doing things the right way. It’s all about preparation. If the kids feel prepared and ready for the challenge, I don’t think they will feel much pressure.

“You have to trust your program and trust your process, that you’ve gotten your kids in the right situations to get them experience. It’s really not a pressure, it’s an expectation to win. That comes with having success.”

Coaches always strive to peak for the state tournament, and nobody did that better than BNL a year ago. The Stars crushed the competition, winning three sectional games by an average of 36.7 points. This year BNL enters the postseason on a modest four-game winning streak, and both losses were by one point on the road.

“I think we’ve played really well coming into the end of the season,” Allen said. “We’re playing really hard defensively. If we shoot the ball well, we’ll be hard to handle.”

BNL proved that point during the regular-season clash with the Bulldogs. The Stars drilled 11 treys over New Albany’s zone, hit their first five shots and scored 14 points in the opening 2:18. BNL cruised from there to a 73-34 triumph.

Freshman star Chloe Spreen was the star that day with 21 points and 11 rebounds, Chloe McKnight added 14 and Irye Gomez totaled 13. BNL also forced 21 turnovers. New Albany will get the chance to see how much it has improved in the two months since that battle.

“Defensively we have picked up our intensity,” New Albany first-year coach Shelby Gliebe said. “We play mostly zone and we’re trusting each other more out of that. We understand what our objective is. We’re moving better out of it. We understand if someone starts hitting, you have to get out on them.”

McKnight leads the Stars in scoring at 14.8, Spreen totals 14.3 (plus a team-best 5.6 rebounds) and Gomez adds 12.0. The two seniors are the most dangerous from the perimeter as both shoot a deadly 40 percent from deep. The two game plans that have worked against the Stars? Slow them down and hope they miss (Brownsburg), or explode early and hold on (Columbus East).

“Really, you kind of hope they’re not having their normal offensive output,” Gliebe said. “We also have to have more girls on our team step up offensively to take pressure off (Taylor) Treat. We have to play very well.

“Of course our game plan is to beat them but we have to have things fall in place. We’re as ready as we can be. It will be a good test to see how far we’ve come, no matter the outcome.”

Treat leads the Bulldogs in scoring at 12.7. Maleea Roland had 14 points in the first meeting with BNL, which limited Treat to 6 points on 3-of-13 shooting. New Albany enters the sectional on a three-game losing skid.

“They have gotten better throughout the year,” Allen said. “Playing them on their home floor is always a concern. So we’ll focus all our attention on them, that’s for sure.

“It’ll be getting off to a great start, both offensively and defensively. If we don’t shoot well, we have to make sure we’re getting stops and rebounds. That will be the focus for us every game, how we defend and how we rebound.”

BNL senior reserve Haley Deckard suffered a right ankle sprain during practice on Saturday and could be questionable for the sectional opener.

Jennings County vs. Seymour: The Panthers feature the best post player in the field with sensational 6-0 freshman Juliann Woodard, who displayed her power in the paint with 22 points during the 57-39 victory over Seymour on Dec. 8 at Seymour.

Woodard is averaging 16.3 points and 11.1 rebounds, the perfect inside complement to senior guard Addyson Kent (14.2), the Missouri S&T recruit with the deadly perimeter range. Kent had 20 points during the win over the Owls.

Seymour will counter with senior forward Grace Meyer (13.9 points, 7.1 rebounds) and junior Grace Schrader (9.4 points, 5.9 rebounds). Schrader had 12 points in the first meeting with Jennings, which went on a 13-1 run to a 30-16 lead while taking control. The Owls hit only 5 of 21 shots in the first half of that encounter.

The sectional champion will advance to the two-game regional, featuring winners from sectionals at Franklin, East Central and Evansville Harrison, at BNL on Feb. 13.

Last meeting: On Dec. 5 at BNL, the Stars blasted to a 73-34 triumph. Chloe Spreen had 21 points and 11 rebounds, while Chloe McKnight totaled 14 and Irye Gomez added 13 for the Stars. Maleea Roland had 14 points for the Bulldogs. BNL hit 11 3-pointers and the Bulldogs had 21 turnovers.

Game notes: New Albany won its last sectional title in 2002. BNL owns a 6-2 record against the Bulldogs in sectional competition. The Stars have won 27 straight sectional games. BNL has won five straight in the series, the last four by an average of 34.5 points per game.

Last meeting: On Dec. 8 at Seymour, the Panthers prevailed 57-39. Juliann Woodard had 22 points and Addyson Kent added 20 points plus 8 rebounds for Jennings. Grace Schrader had 12 points for the Owls.

Game notes: Jennings County is chasing its first sectional title since 2005. Seymour won its last sectional in 2008. Seymour and Jennings are meeting in the postseason for the first time since 2008.