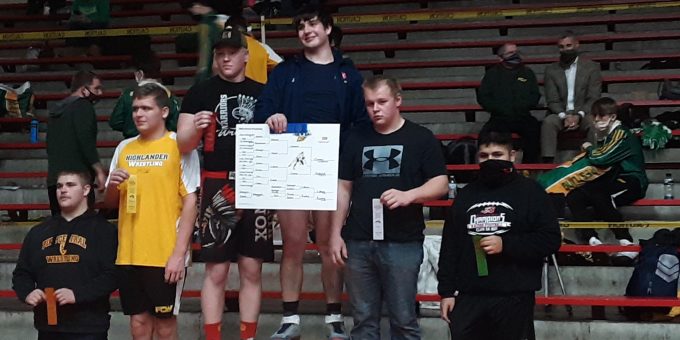 Covey earned revenge for an earlier loss this season, decking North Knox’s Beau Noland in the final, while earning a trip to the regional, the second step in the four-stage state tournament series.

The Stars advanced two to the regional round as Gunner Connaughton finished third at 195. The top four in each weight class qualified for the regional at Bloomington South on Feb. 6.

Covey advanced to the final with a first-round pin of New Albany’s John Orr in 27 seconds, then conquered Jasper’s Will Collon in 1:58 to set up a rematch with Noland for the title. Noland was the top seed after pinning Covey in 1:00 during their regular-season battle at BNL on Dec. 23.

“James was focused,” BNL coach Chris Branam said. “He came in wanting to win the whole thing. You never look past competition, you take one match at a time. But at same time he knew the first two were stepping stones to get where he wanted to be. James wanted his vengeance today.”

He got it after some tense drama. Near the end of the second period, Noland slammed Covey on his sore shoulder with an illegal move. Rather than accept the injury default for a victory, Covey used his anger to flatten Noland only 10 seconds in the third period.

“When I get mad, it’s game on,” Covey said. “That was my motivation. If I could still move, it wasn’t hurt that bad. Once I got up, I took him back down and pinned him.”

“I was a little nervous about him finishing,” Branam said. “It was his call, only he knew how painful it was and what he was capable of doing. He wanted the win, he wanted to beat the kid.

“It shows a lot of integrity. He could have taken the injury default for the win. He wanted to beat him outright. That showed a lot of grit and how badly he wanted it.”

“My mindset was going in to take the No.1 spot, defend my title,” Covey said. “Keep my title as champion. I kept my head straight and did what I had to do. It means a lot to me. Winning two in a row is a good feeling.“

Connaughton (17-10) won three matches to earn his regional assignment. He opened with a pin of North Knox’s Ezekiel Valenciano in 1:59, then lost to Japser’s Ashton Schuetter by a 7-1 decision. He came through the consolation bracket with victories over Floyd Central’s Dakota Bennett (7-0) and Pike Central’s Corey Goeppner (5-4).

“Gunner wrestled well,” Branam said. “He wanted to make it through. He looked really sharp, looked confident. We love seeing the guys believe in themselves.”

The Stars, with only eight competitors in the 14 classes, finished seventh in the 10-team field with 68 points. Floyd Central won the team crown with 262 points.

The top four places in each class at the regional will qualify for the semistate at Jasper on Feb. 13.