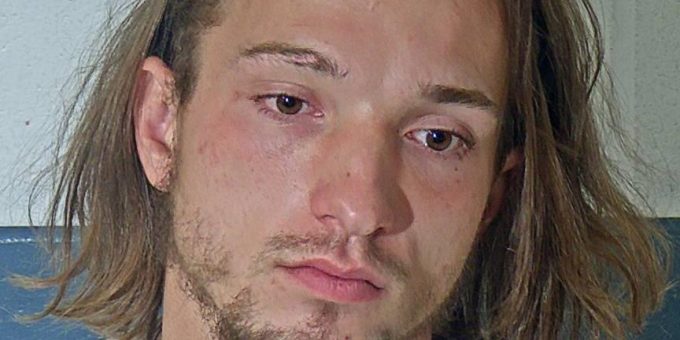 (BEDFORD) – An Ohio man was arrested early this morning on a warrant for charges of auto theft, unlawful entry of a vehicle, and criminal trespass.

According to a probable cause affidavit, on Wednesday, October 21, 2020, at approximately 8:28 a.m. the Lawrence County Sheriff’s Department responded to a report of vehicle theft. The caller reported their car, a 2011 light blue Chevrolet Cruze, had been stolen sometime between 6 a.m. and 8 a.m. from their home.

An officer found a black moped abandoned along the roadway very close to home where the vehicle was stolen.

They knew the owner of the moped was 18-year-old Austin Sullivan.

Indiana State Police were requested to assist in the investigation.

On Thursday, October 22, 2020, at approximately 7:32 p.m. a trooper interviewed Sullivan. He told police that he and his girlfriend and another male had taken a cruise through the country on October 31. Sullivan said he was on his moped with his friend riding on the back. His girlfriend was on a black minibike. The three then spotted the silver Chevrolet in the driveway.

Sullivan told police the Ferguson approached the car and opened the driver’s door, discovering the keys inside.

Sullivan said he got in the driver’s seat and Ferguson seated himself in the passenger seat. Sullivan drove the car out of the driveway.

Sullivan said Ferguson planned to trade the vehicle in Louisville. On Wednesday, October 28, 2020, the stolen vehicle was recovered in Louisville by the Louisville Police Department.

During a police interview, Sullivan was remorseful and apologized for his actions. He was arrested on Tuesday, January 12, 2021.

Ferguson, who was in Louisville, Kentucky, was interviewed on the phone. Ferguson denied any knowledge of the car.

The information was forwarded to the Lawrence County Prosecutor’s Department and a warrant was issued for Ferguson’s arrest.