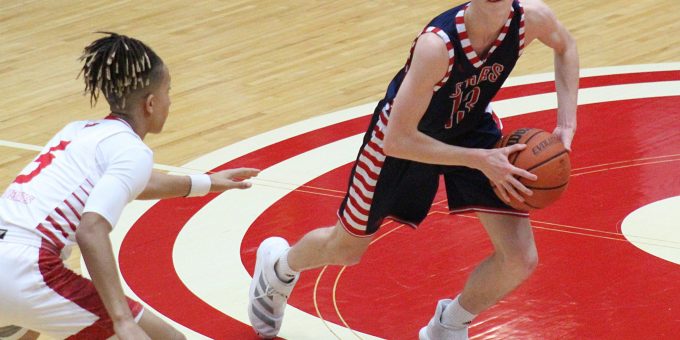 BEDFORD – January is almost over, and Jeffersonville is still tweaking, tinkering and adjusting. A late start, personnel moves, a new coach, and a key mid-season roster addition has caused more shifts than California ground near the San Andreas fault.

After connecting so many moving parts, the Red Devils are starting to stabilize, just in time for a captivating clash with Bedford North Lawrence on Friday night.

During this season like no other, Jeffersonville (5-5) has endured more than its share of turbulence. First came a coaching change, the second in two years, as former Providence boss Andrew Grantz was hired in May to succeed Chris Moore. Then came a transfer as star guard Brandon Rayzer-Moore returned to the program after two years across the Ohio River in Jeffersontown.

Then, of course, came COVID, again. The entire program was shut down and delayed for over three weeks, with the Devils finally making their season debut on Dec. 18. Now, after a 3-5 start with a rough schedule, another Jeffersontown transfer has moved back, with senior Jaylen Fairman making an immediate impact the last two games.

Jeffersonville (5-5, 1-2 in the Hoosier Hills Conference) is back on solid ground. Rayzer-Moore, a 6-5 junior guard with long-distance ability, is averaging 18.3 points, 6-5 junior forward Will Lovings-Watts is adding 17.9, and junior guard Kobe Stoudemire is contributing 11.7.

“We’re still learning so much,” said Grantz, a 31-year-old who guided Providence to a 50-23 record from 2014-17, spent two successful years at Fort Myers High School in Florida, then worked last season as an assistant coach at Missouri Baptist University, an NAIA school near St. Louis.

“With a new team, a new system, quarantine held us back. We’re still learning that trust, what’s our best way to play. We feel like we get a good rhythm going, then we’re still doing some tweaking. They’re a tough group. I’ve been proud of them. And getting two double-digits wins, after a tough stretch, I’m proud of the way they’ve bounced back.”

The additions of Rayzer-Moore, a two-year starter at J-town, and Fairman, who has scored 19 points in his two games, have been important, keeping the rim-attacking Lovings-Watts from attracting to much defensive attention.

“With Rayzer-Moore, it’s his ability to shoot from deep,” Grantz said. “It allows us to stretch the floor, and he’s leading team in deflections. He allows us to get out and run a little bit. With Fairman, with his speed, he sees the floor really well, he’s allows us to play faster and get some easy baskets. That’s helped a ton. He’s trying to do all he can do to help the team win.”

“They’ve very athletic, as always, and they’ve got good team speed,” BNL coach Jeff Hein said. “They‘ve got length, and they’re going to try to speed the game up. They do that with their defense, so we have to handle the basketball and handle the pressure.”

While the Devils have won back-to-back games over North Oldham and Columbus East, BNL slipped back a bit with the Saturday loss at Edgewood. BNL rallied from a 16-point deficit to take the lead in the fourth quarter, then struggled through some key possessions that allowed the Mustangs to take control.

“After we got down, we played very well for the next quarter and a half,” Hein said. “And we even took the lead with the ball. We got ourselves in position to make them play the way we wanted, and we didn’t do it. Maybe it was youth and lack of experience, but I’m hoping we learn from it and are more patient.

“They were quick shots (during seven straight empty possessions in the fourth quarter). We lost our composure a little bit, and that’s one thing we can’t do. We have to stay mentally tough. We got impatient. Despite that, we made two really good comebacks. We just dug the hole so deep.”

Last year, the Stars conquered the Devils 61-60 in what must be labeled the most impressive win of Hein’s first season. Kooper Staley had 26 points (with six 3-pointers) and Brayton Bailey added 23 points. Stoudemire had 18 points for Jeff.

“I went back and watched that, and we played so well,” Hein said. “That was probably our best game, our best win, especially on the road. We weren’t expected to win, and we played almost a perfect game on both ends of the floor. It will take that type of effort again.”

“They move the ball, they cut extremely hard, they spread you out,” Grantz said. “They do a very good job of driving and playing off spin moves. It will be a challenge for us to keep the ball in front of us and be physical.

“Bedford is a tough place to play. They got us last year, and we want to come back and get a little revenge. We want to take care of business.”

Last meeting: Last year at Jeffersonville, Kooper Staley exploded for 6 3-pointers and 26 points as the Stars posted a 61-60 victory. Brayton Bailey had 23 points for BNL. Kobe Stoudemire had 18 points for the Devils.

Game notes: Jeffersonville leads the series with BNL 29-28. The Devils didn’t start the regular season until Dec. 18 and had 10 games scheduled in January. Jeffersonville’s game with Louisville Waggener on Wednesday was cancelled.