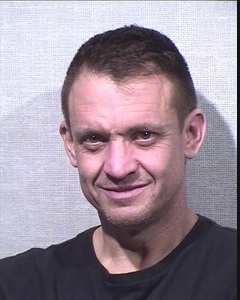 (SEYMOUR) – The Seymour Police Department released information in regards to a stalking investigation.

The Seymour Police Department and Jackson County Sheriff Department began receiving complaints of stalking and invasion of privacy being committed by 43-year-old Jessie L. Brown, of Crothersville, in September of 2020.

Over the next several months the Seymour Police Department and Jackson County Sheriff Department received a total of 13 complaints from a victim that Brown was violating a protective order.

Three of the complaints resulted in criminal charges being filed.

On January 19, 2021, investigators and officers from both departments served an arrest warrant on Brown on charges of stalking and invasion of privacy at his home in Crothersville.

Brown was taken into custody and taken to the Jackson County Jail.

On January 21, 2021, officers with both departments secured a search warrant for Brown’s home at 10050 East State Road 250 in Crothersville.

When the search continued, officers found numerous media type devices, more than four ounces of meth, a handgun, drug paraphernalia, a bulletproof vest with the word “Sheriff” on it, and an old Jackson County Sheriff Department uniform shirt with a badge.