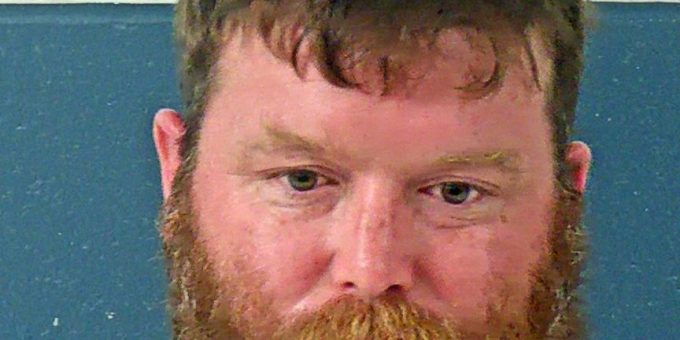 (MITCHELL) – A Mitchell man was arrested after Mitchell Police officers were called to a home Sunday in the 900 block of Tulip Street.

Officers arrested 35-year-old Aaron Little on a charge of domestic battery in the presence of a minor.

According to a probable cause affidavit, when officers arrived at the home they found Little standing outside the glass front door talking to a female. He was wearing nothing but socks and underwear. Police say it was 33 degrees outside and was lightly snowing.

As the officers approached the house Little began cursing saying he messed up.

Officers could detect the odor of alcoholic beverages emitting from Little. They also noticed an injury to his left forearm.

Little told officers he had done nothing wrong and it was just a verbal altercation.

Little was unaware he had injured his arm. Then stated, “she
came at me.”

When officers entered the home they found a 13-year-old girl standing with her mother. Both were crying. The girl had called 911 and was talking to the dispatcher.

The girl told police after her parents returned home from drinking, her father began arguing with her mother. The girl asked her father to stop but instead became belligerent with her. The mother attempted to aid the daughter that resulted in Little shoving the woman off the steps onto the concrete. He then got on top of her and began hitting her.

Police said the woman had blood on her chin and mouth and said her head hurt. She refused medical attention.

The officer asked how Little received the injury to his arm. The woman said she didn’t know but she had started kicking and throwing punches in an attempt to get Little off of her.

The woman told police that when Little gets intoxicated, he uses her as a “punching bag”. The girl told the police the same story and mentioned “he does it every time he drinks”.

The woman told police Little was a “good guy” except when he is drunk. She then began blaming herself for the events and should have not said anything to him.

The woman just wanted Little to leave the house for the night. She allowed officers to only take two photos of her injuries and refused to write out a statement.

Little told officers he could not remember what happened or how he was injured and apologized.

Little was arrested and the Department of Child Services was alerted.