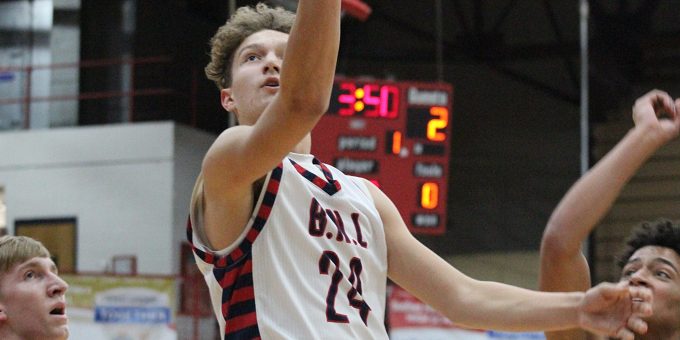 BEDFORD – Edgewood’s Coleman Sater, on the verge of two career milestones, posts numbers that deserve a knight’s medieval title. Like Sater the Slayer. Or maybe Sir Sater the Splendid.

Sater, who’s closing in on 1,000 career points and 500 career rebounds, will power the Mustangs into battle with Bedford North Lawrence on Saturday night as Edgewood looks to extend its current four-game winning streak.

BNL, coming off a tough road trip to Seymour on Friday while Edgewood has had the entire week to focus on the Stars, will have its hands full.

“Edgewood is peaking and playing well,” BNL coach Jeff Hein said. “It‘s going to be difficult. We’ll find out a lot about our team. We will have to adjust to Edgewood’s aggressive defense.

Sater was a second-option piece last year as Edgewood went 15-11 under new coach Matt Wadsworth. Now he’s matured to the main weapon, while Huttenlocker has made a surprise impact after making the transition from the junior varsity.

“This season we continue to mature and grow with each game we play,” Wadsworth said. “Coleman has been very consistent for us in all areas – scoring, rebounding, and defense. Few teams can say that their best player is their hardest worker. We are fortunate to have that in Coleman.

“Caden is having a breakout season. He was the leading scorer on last year’s JV team. It has been a smooth transition to the varsity level. Zeke Powell has stepped up his game. He is more comfortable in the point guard position. I’ve been impressed with his ability to finish around the basket.”

BNL won last year’s meeting 60-52 as Ben Cosner found his shooting stroke and scored 18 points. Brayton Bailey had 17 points, 11 rebounds and 7 assists as the Stars – with all five starters playing the entire 32 minutes – won their third straight in the series. Trevor Taylor had 22 points for the Mustangs.

“Coach Hein is one of the best coaches in southern Indiana,” Wadsworth said. “As he instills his program, I’m starting to see BNL play with the toughness that his past teams played with. BNL has done a good job at controlling the tempo. We will have to do a good job defensively. Another challenge is to keep them off of the offensive glass at all times.”

Last meeting: Last year at BNL, Ben Cosner scored 18 points as the Stars prevailed 60-52. Brayton Bailey had 17 points and 11 rebounds for BNL, while Trevor Taylor had 22 points for the Mustangs. All five BNL starters played the entire 32 minutes.