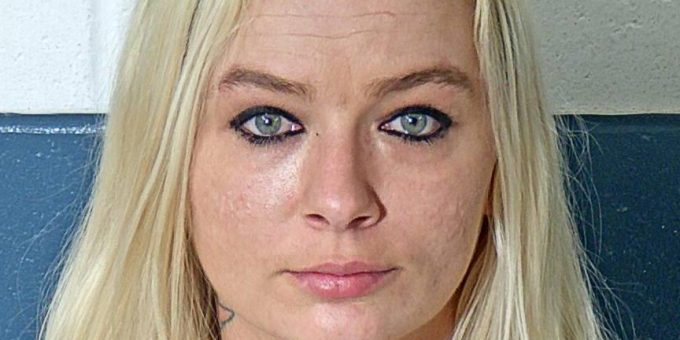 (BEDFORD) – A Bedford woman was arrested on a warrant Thursday morning on drug charges.

According to a probable cause affidavit, on December 16, 2020 at  approximately 9:18 p.m. Bedford Police officers were requested to a home in the 620 block of R Street after receiving a 911 call reporting an unresponsive male.

The caller reported to the dispatcher a male was unresponsive and drugs were all over the apartment.

Officers arrived on scene, and located an incoherent male thrashing his legs in a bedroom of the apartment.

Hood told police there was heroin in the bedroom of Hoods apartment.

Officers said both Hood and the male appeared to be “heavily under the influence of some sort of substance”.

While waiting for the ambulance, officers located a plastic bag containing marijuana and two smoking devices. They also located half of a soda can containing a white pasty residue around the bottom rim of the soda can. That substance tested positive for cocaine.

IU Health Paramedics arrived on scene and began treatment to both Hood and the visiting male.

Police report Hood was in a hallucinated state and also attempted to eat dog food off the kitchen floor.

Due  to their high levels of intoxication, both Hood and the male were transported to the IU Health Emergency Room for further treatment.

Judge John Plummer approved the search warrant that enabled the investigating officers to locate additional drug paraphernalia with meth residue, smoking devices, and numerous pill bottles containing pills not prescribed to either Hood or the male.

The child told police she was in her room when her mom started yelling “you can’t be  in here! There’s bad stuff in here!”  The child told officers she didn’t know what the “bad stuff” was but that her mom told her it was “poisonous stuff.”

Child Services were contacted and made aware of the situation. The child was released to the care of her father.

The information was forwarded to the Lawrence County Prosecutor’s Department and a warrant was issued for Hood’s arrest.