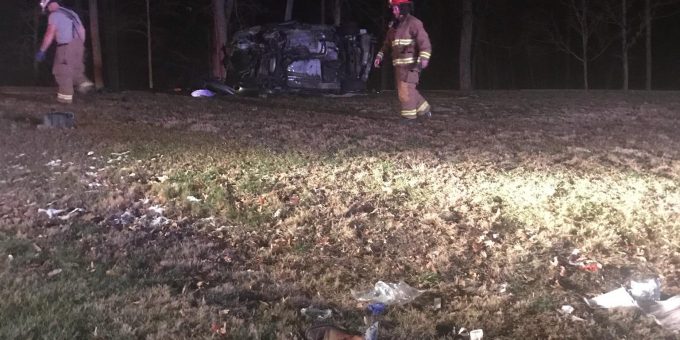 (BEDFORD) – Two people were injured in a one-vehicle accident in the 7140 block of Leatherwood Road Wednesday night.

According to a Lawrence County Sheriff’s Department police report, when officers and first responders arrived on the scene the 2000 Pontiac Grand Am was found overturned and engulfed in flames in a grass clearing on the south side of the road.

An officer found the driver 24-year-old Taylor Carwile, of Heltonville, lying face-up on the embankment as nearby residents and a member of the Shawswick Volunteer Fire Department attended to Carwile.

Carwile suffered a compound fracture to his right arm and was complaining of leg pains.

The passenger in the vehicle, 17-year-old Braiden Bowens, of Bedford, was found near the roadway with a head injury. He was being treated by Shawswick VFD first responders. His left ear was mostly severed and he suffered a large cut to his upper jaw.

Police say marks on the roadway indicate the car left the south side of the roadway after Carwile applied his brakes and the left rear tire had blown out. The accident remains under investigation.

Blood alcohol tests were requested which is standard procedures. Those results are pending at this time.