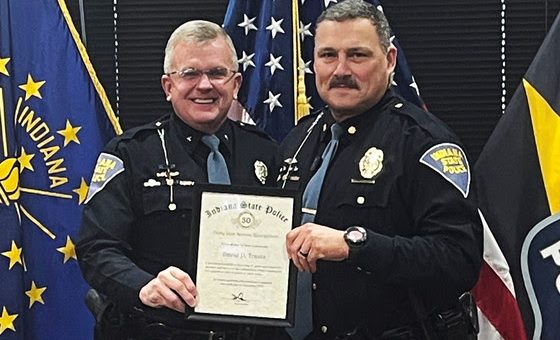 (INDIANAPOLIS) -The Superintendent of the Indiana State Police, Douglas G. Carter recently recognized Major David P. Travis for achieving 30 years of service to the Department and to the citizens of Indiana.

Travis, who is originally from Fort Wayne, Indiana, is a 1984 graduate of the former Elmhurst High School, and in 1988, he earned his Bachelor Degree in Aviation from Indiana State University.  On December 9, 1990, he graduated from the 48th Indiana State Police Recruit Academy, and was appointed as a Trooper and assigned to the Indiana State Police Post in Seymour, where he served for 19 years.  During that time, Travis had attained the ranks of Corporal and then First Sergeant.

In 2017, Travis was promoted to the rank of Captain, where he served as the Assistant Commander of Special Operations, and in September of 2019, he was promoted to the rank of Major and he currently serves as the Commander of Special Operations.  During his career, Travis has served the Indiana State Police in the following disciplines:  Field Training Officer, Tactical Intervention Platoon, S.W.A.T, Clandestine Laboratory Team, and Lead Firearms Instructor for the Indiana State Police Recruit Academy.