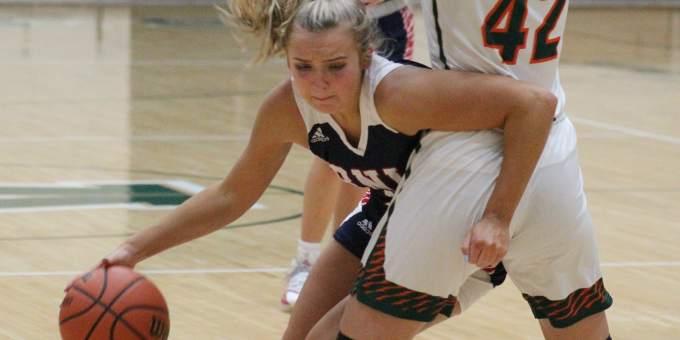 BEDFORD – Rested and recharged, Bedford North Lawrence will finish its five-game road trip – and have logged over 12 bus hours and 520 highway miles in the process – on Saturday afternoon. Final destination: Jasper.

The No.3 Stars, after some time away from the court to shake the road lag, will unleash its road rage on the Wildcats, using the final journey of the regular season as an important preparation game for the looming postseason.

For BNL, this contest is about tinkering, refining, tweaking the finer points of the overall game while looking ahead to the Class 4A sectional. The Stars will learn their sectional fate when the draw is announced on Sunday night.

For the Wildcats, this is about survival. Jasper (4-9) has been swamped by constant virus quarantines, which has disrupted continuity and improvement. While the Stars can certainly sympathize, there is no time for a letdown.

“For us, it’s all about our performance and doing things the way we want, improving the things we want to improve, getting ready for the final week of the season,” BNL coach Jeff Allen said. “We did a really good job of playing hard at Vincennes Lincoln (on Monday), being competitive and not taking plays off. We’ll be looking to do that again on Saturday, try to push the pace and play at the speed we feel we’re good at, to be prepared for the postseason.”

BNL’s performance at Lincoln was spectacular in many respects, most notably the third-quarter explosion that rocked the Alices. The Stars hit 15 of 16 shots that period and totaled 33 points. They won 78-28. As a reference point, Lincoln thumped Jasper 66-33 the next night. That’s a score comparison red flag.

The Stars have a lot of firepower with senior Chloe McKnight (14.7 points), freshman Chloe Spreen (14.3) and senior Irye Gomez (12.2) leading the way. BNL is averaging 8 made 3-pointers per game, and the Stars also have three players averaging over 2 steals per game, one of the reasons they’re allowing only 41.1 points.

So what’s left to improve? Decisions, what constitutes a good shot while considering the game circumstance, even at the full-speed, warp-drive pace BNL prefers.

”The big thing is execution and our understanding of game situations,” Allen said. “You can always get better at your execution. As a coach, you never say ‘Well, that was perfect.’ Defensively we’re playing really well. Offensively, we can still get better.

“We’ll get ready from the standpoint of really practicing hard and get our conditioning back underneath us. Both mentally and physically, I hope they’ve recovered over the last couple of days. I think they needed it.”

The Wildcats will feature senior guard Emma Shelton (11.7 points) and senior forward Hannah Schwenk (7.7 points, 5.1 rebounds). Jasper, while struggling with the virus protocols, had lost 6 of its last 7 games until Thursday’s 48-40 victory over Evansville Reitz.

“Our biggest concerns are trying to control the tempo and taking care of the ball,” Jasper coach Jessica Mehringer said, echoing the sentiments of so many BNL opponents.

BNL and Jasper are meeting for the first time since the 2016 Pete Pritchett holiday tournament. The Stars won that one 66-44 as Kennedy Bunch scored 20 points.

The IHSAA will reveal the sectional brackets on Sunday at 7 p.m.

And from the FYI file, Columbus East clinched the Hoosier Hills Conference title with a 72-64 victory over Jennings County on Thursday night.

Last meeting: BNL conquered the Wildcats 66-44 in the consolation round of the Pete Pritchett holiday tournament at BNL during the 2016-17 season. Kennedy Bunch had 20 points for the Stars.