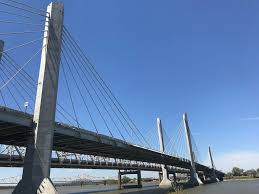 (UNDATED) – Indiana has picked the route for a planned new toll bridge from Evansville into Kentucky.

Governor Eric Holcomb announced that the Indiana Department of Transportation has found a preferred alternative route, which will be a new, four-lane tolled Interstate 69 bridge.

Both Indiana and Kentucky plan to continue financial analysis and seek federal grant opportunities to reduce the revenue needed from tolls.

INDOT will retain one of the existing U.S. 41 Ohio River bridges for local traffic. That bridge will not include a toll. INDOT chose to retain the northbound U.S. 41 bridge due to its historic significance and serviceable condition.

According to a news release, INDOT’s selection for the I-69 Ohio River Crossing paves the way for publishing a final environmental impact statement and record of decision. Both of those are expected to be released sometime this year.

INDOT’s new toll road decision is in partnership with Kentucky. Both states will share costs of the I-69 Ohio River Crossing, which is estimated to be $1.5 billion. Funding will come from toll revenue and existing federal/state transportation funds. Costs include roadway and bridge operations and maintenance for 35 years following completion of construction.

According to INDOT, the I-69 Ohio River Crossing will provide cross-river system linkage and connectivity between I-69 in Indiana and I-69 in Kentucky that is compatible with the national I-69 corridor. The project is expected to reduce traffic congestion and delays and improve safety for cross-river traffic.