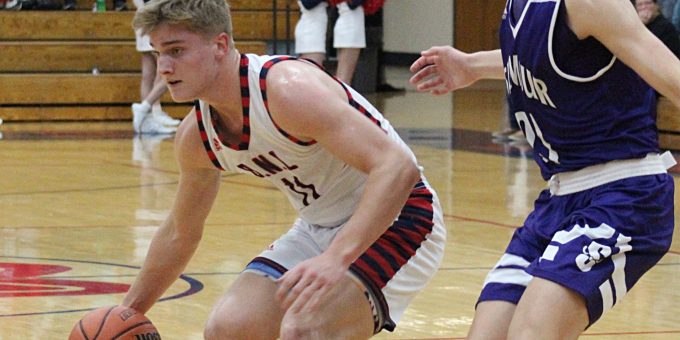 BEDFORD – Isn’t it ironic that a guy who led the state of Indiana in scoring twice during his high school career at North Judson coaches a team that plays a style suitable to using a sun dial as a shot clock?

Seymour’s Kirk Manns teaches an ultra-deliberate, tough-nosed, tight-fisted game, placing an emphasis on patience and execution, on defense and composure. It might not be popular, or conducive to viral highlights for social media, but it works. And it must be respected.

The low-flying Owls will test Bedford North Lawrence’s tolerance for the chase when the Stars invade the massive Owls Nest on Friday night. The value of possessions, much like the stock market, will skyrocket.

Seymour (6-6, 1-2 in the Hoosier Hills Conference) averages a modest 44.4 points per game, and has scored under 40 five times. That’s by design. It plays to the strength of his personnel and gives the Owls their best chance to win.

“Believe it or not, I love watching the way they play,” BNL coach Jeff Hein said. “A lot of people don’t, because they’re so deliberate. They’re so fundamental, they play as a team, they defend you hard, and they go to the boards so hard. They’re just a disciplined team. That’s the way I want our team to be.

“Kirk’s teams remind me of (legendary Washington coach) Gene Miiller’s teams in a lot of ways. They just get better as the year goes on, they continue to develop and have kids rise to the top.”

Watching it and playing against it are two different things. Seymour can kill a lot of time with its probing, waiting for a breakdown, and it plays outstanding defense. Scoring against the Owls can be tough.

“You’re looking at a game with 40 or fewer possessions, so each one gets magnified on both ends,” Hein said. “It almost counts as 1 1/2 possessions or even two. It’s just realizing it’s going to be a slower game. We’re hoping the South Knox game (a 36-30 win) will be good preparation for us, to remind us of patience on both ends of the floor.”

Seymour is a young squad, with three sophomores and two juniors in the starting lineup. The Owls will feature the front line of Casey Regruth, Marcus Brooks (11.0) and Eli Meyer (11.0), who have similar games. Like many youthful teams, they’re better at home (5-2, with an overtime loss to New Albany), and they’re coming off their best performance of the season, a 65-56 win over Columbus East.

That point total is the first time Seymour has scored over 60 since Manns took over.

“We’re starting to make some strides,” Manns said. “We have to make sure we control the tempo, play at the pace to be successful. We try to control the defensive end, gives ourselves a chance at the end of the game.”

“They have more weapons to take care of,” Hein said. “They have several who can score. The three inside guys are basically triplets, they’re long and athletic, and they really go to the glass hard. I think they’re better offensively, and in a lot of ways they’re similar to us. They’re a lot more balanced.”

BNL (5-6, 2-1) is also riding some momentum following the 62-52 triumph over Jennings County that represents the best performance of the season. Sophomore guard Colten Leach leads the Stars in scoring at 11.6, followed by senior Ben Cosner (11.0) and senior Kooper Staley (10.6).

The Stars won last year’s clash 40-26. Seymour scored only 13 points through the first three quarters and was threatening to shatter the BNL record for fewest points allowed (24). Brayton Bailey paced the Stars with 13 points, although BNL didn’t set any offensive marks. That’s a testament to Seymour’s defensive doggedness.

“You can’t say enough about the way he coaches them up,” Hein said. “We both have the same idea, the same philosophy of how to play the game. I’m hoping at some point someone will say the same thing about us.”

“They have a different team this year, and they’re starting to figure things out,” Manns said. “They have experience in Cosner and Staley, and young kids are figuring out their roles.”

Last meeting: Last year at BNL, the Stars shut down the deliberate Owls 40-26. Brayton Bailey had 13 points and Kooper Staley added 10 for the Stars. Landon Fritsch had 12 for Seymour.

Game notes: Seymour coach Kirk Manns, a North Judson graduate, was an Indiana All-Star in 1986, and he led the state in scoring as a junior and senior. The Owls have reached double digits in wins only once in the last 10 seasons.