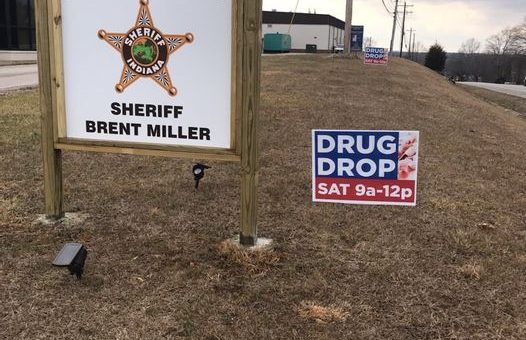 (SALEM) – The Washington County Sheriff’s Department, in partnership with the City of Salem Police Department, will hold its annual Drive-Through Drug Drop on Saturday, January 23 between 9 a.m. and Noon.

Sheriff Brent Miller invites you to stop in and drop off any expired or unneeded prescription medications at the Washington County Justice Center.

“Families should be encouraged to bring their unused or expired medications to the drug drop. It can be dangerous to leave medications in the home, particularly controlled substances, like opioids,” said Sheriff Miller.

If you are unable to drop off your prescription medications during the January 23rd event, there is a secure drug drop box available at the Sheriff’s Department 24 hours a day, 7 days a week for proper disposal.

The City of Salem Police Department also has a dropbox in their office lobby. Since the drug drop program began in October of 2019, the Sheriff’s Department has collected more than 240 pounds of unused or expired medications.

The program also serves as a reminder to the public to never flush medications and to properly dispose of them at these secure locations. All medications collected during the drop are immediately incinerated by Sheriff Brent Miller and Salem Police Chief Tim Miller.

In addition to the collection of unused prescription medications, the Departments will also be sponsoring a food drive to support the local food bank. Donations of non-perishable and canned food items will be accepted during the drug drop event.

“The success of our Cram the Cruiser event was a blessing to many in our community,” said Sheriff Miller.

Thanks to the generosity of our citizens, we collected 5,551 food items and donated them to the Washington County Food Bank.

“We know the food bank can sometimes be forgotten after the holidays and want to do our part to help them restock,” said Sheriff Miller. “Thank you for not only helping to keep our community safe by properly disposing of unneeded or expired prescriptions but also generously supporting our local food bank.”

For more information about either program, contact the Washington County Sheriff’s Department at 812-883-5999.