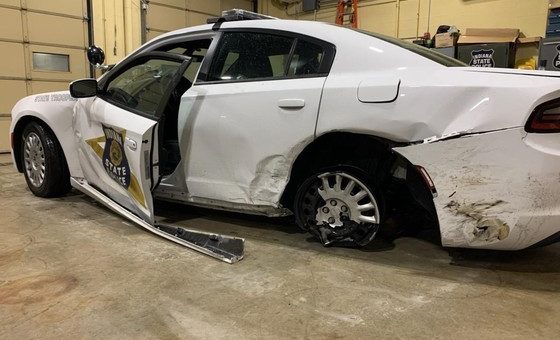 (HAMMOND) – For the third time just weeks, an Indiana State Trooper has been struck while investigating an accident.

Sunday at 4:07 a.m., troopers from the ISP Lowell Post were investigating a multiple-vehicle crash on I-80/94 eastbound at the 1.7 mile-marker.  As a result of this crash, the right three lanes were blocked as one of the vehicles stalled and was unable to be moved from the lane.

According to an ISP report, ISP Trooper Jarah Burgin parked his police car behind the disabled vehicle with its emergency lights activated.  He also placed approximately 30 flares on the roadway to block the lanes.  This is done for several safety reasons, including to alert drivers of the blocked lanes as well as to provide additional warning lighting at the scene.  There were also at least three other police cars at the scene with their emergency lights activated.

As Trooper Burgin was standing outside of his police car and about to enter it, a tan 2007 Buick disregarded the flares and lighting and struck the 2020 Dodge Charger police car.  The Buick then struck Trooper Burgin, catapulting him into the air and striking the windshield of the Buick before the vehicle eventually stopped.

Trooper Burgin’s handcuffs were lodged in the windshield of the Buick.  Troopers at the scene immediately began to render aid to both Trooper Burgin as well as the driver of the Buick, 35-year-old Jennifer A. Spikes, from Gary, IN.  Both were transported to Community Hospital in Munster.

Trooper Burgin sustained serious injuries but is expected to make a full recovery.

As a result of the crash, evidence at the scene led troopers to believe that alcohol may be a factor.  Spikes was offered field sobriety tests as well as a certified chemical test for intoxication and drugs, but she refused all tests.  A search warrant for a blood draw was requested through the Lake County Prosecutor’s Office.  Once approved by a judge, the search warrant was executed, and a blood draw was completed.  The results of that test are pending.

Jennifer Spikes was later released from the hospital and transported to the Lake County Jail on charges of operating a vehicle causing injury, OWI endangerment, OWI, driving while driver’s license suspended causing injury, and issued a citation for failure to yield to emergency vehicles.