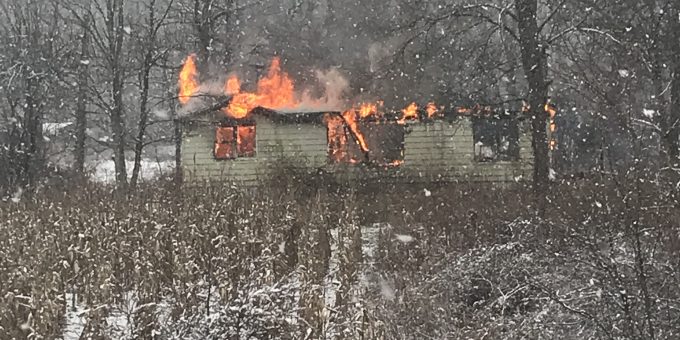 At 9:35 a.m. the two fire departments responded to the 1600 block of West State Road 60 near the State Road 50/60 split in western Lawrence County after a report of a house fire.

When firefighters arrived the landowner advised them the home was abandoned and was intending to demolish the home anyway.

Fire officials were not able to provide how the fire started. They decided they would let the structure out. They concluded due to the current weather conditions; low temps with a wet snow blanketed ground, there was not threat of the fire from spreading.

Residents in Lawrence County are reminded of the open burning laws in Indiana and are subject to fines by not following those guidelines from the Indiana Department of Enviromental Management.

Open burning is the burning of materials in a manner that releases smoke and other emissions directly into the air without passing through a chimney or smokestack from an enclosed chamber. Pollution from open burning is a serious concern because it can harm human health and the environment.

Printable information is available for download describing what materials may or may not be open burned by businesses, agricultural, and residential sectors:

Even where it is allowed by state and local regulations, open burning is not advised. Fortunately, there are safer and environmentally friendly alternatives. IDEM enforces Indiana’s open burning rules and works in partnership with local law enforcement, fire departments, and public officials to educate the public and resolve complaints.

All controlled fires must be reported to the Lawrence County Police Department at 812-275-3316. This is to prevent unnecessary fire department responses and keep personnel safe.