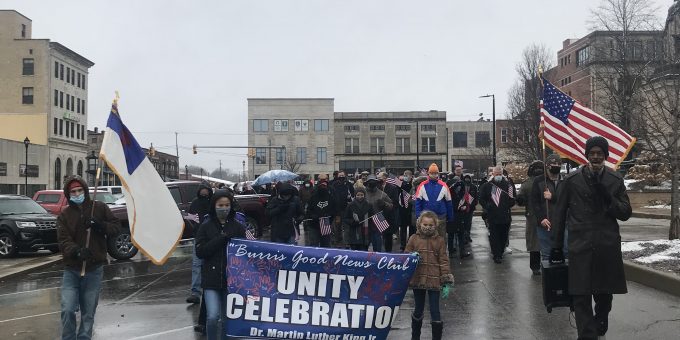 Clarence Brown and Bedford Mayor John Williams started the Unity March 32 years ago. Clarence has continued leading this march over the years through local mayoral changes.

Despite the weather or political climate, Brown has only one message – “Love”. Love is often referred as the strongest of all human emotions. Clarence believes Love is needed to overcome prejudice and hate. Brown says love wins every single time.

Charlie Kirkman played the National Anthem and the crowd said the “Pledge of Allegiance”.

Local minister Taylor told the crowd he has lived in Bedford his whole life and probably will die here. Taylor emphasized he is glad to live in a city like Bedford.

Clarence Brown read a list of local law enforcement officers who died in the line of duty thanking them for their community service.

After the songs, speeches, and exhortation to love one another, the attendees marched around Bedford Square and then headed home after the approximately hour-long event concluded.

This year’s format was altered due to COVID-19 restrictions. The standard local meeting church was eliminated from the event. However, the theme of the previous year’s march was not lost in a community coming together under “Peace and Love”.

“The march has never been used as a protest, and never intended to bring dirt on a political person,” said Brown.

“We want to show the people in Washington D.C. that you can still come together under the flag of the United States and be together even though you are different in color, race, creed, woman or man, you can come together under love,” Brown concluded in an interview with WBIW earlier in the week.