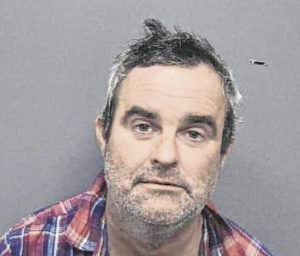 (JENNINGS CO.) – A Norman man was arrested after he led Jennings County Sheriff’s Department deputies on a pursuit Saturday night.

According to a press release, the pursuit began around 7:50 p.m. after the department’s K-9 officer attempted to conduct a traffic stop on a maroon 2008 Mercury Sable traveling east on US 50 near Fourth Street in North Vernon for speeding.

The driver, 48-year-old Terry Trowbridge, failed to stop and accelerated to elude the officer. Speeds reached close to 100 miles per hour.

Trowbridge fled north onto Main Street in Butlerville before coming to a stop.

Trowbridge was arrested on felony charges of resisting law enforcement, operating a vehicle as a habitual offender and was issued numerous citations for traffic infractions.

Trowbridge is being held in the Jennings County Jail on a $1,055 bond.